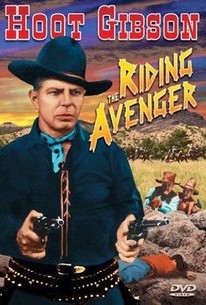 The Riding Avenger in this low-budget western is Buck Conners, played by Hoot Gibson. Appointed a special deputy, Buck is sent to help out a rancher who is being plagued by outlaws. Unfortunately, the man he was assigned to protect is murdered, and Buck is accused of the crime. Forced to go undercover, he joins the villains to expose the actual killer -- but things get really hairy when the bad guys kidnap his sweetheart Jessie McCoy (June Gale, then Mrs. Hoot Gibson). The Riding Avenger is highlighted by a nice comic moment in which star Gibson, emulating Buster Keaton, deliberately inaugurates a wild chase.

There are no critic reviews yet for Riding Avenger. Keep checking Rotten Tomatoes for updates!

There are no featured reviews for Riding Avenger at this time.