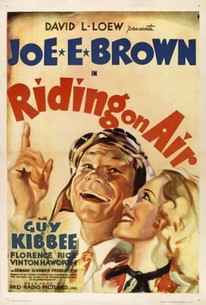 A lesser but no less amusing Joe E. Brown vehicle, Riding on Air was adapted from a series of Saturday Evening Post stories by Richard Macaulay. Brown and Vinton Hayworth play Elmer Lane and Harvey Schumann, two rival small-town newspaper reporters who spend half their time fighting over stories (including a juicy murder yarn) and the other half battling over heroine Betty Harrison (Florence Rice). Elmer finally gains the upper hand when he stumbles upon a gang of airborne smugglers; commandeering the crooks' plane, our hero goes on a wild and crazy ride before the aircraft is brought under control by a revolutionary new radio beam. He then settles the hash of local swindler Doc Waddington, played by Brown's old Warner Bros. crony Guy Kibbee. Produced independently by David Loew, Riding on Air was released by RKO Radio.

Clem Bevans
as The Sheriff
View All

Critic Reviews for Riding on Air

There are no critic reviews yet for Riding on Air. Keep checking Rotten Tomatoes for updates!

There are no featured reviews for Riding on Air at this time.