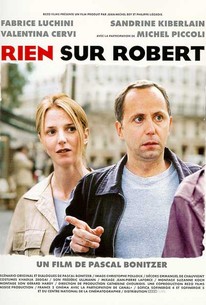 Rien sur Robert is a smart comedy about a man haunted by his experiences. Didier Temple (Fabrice Luchini) is a journalist who writes an article about a Bosnian film he had never seen, calling it "pure fascist propaganda." (The director, Pascal Bonitzer, was once the editor of the celebrated film magazine Cahiers du Cinema. However, this episode is not based on his own experiences, but on an incident some years ago regarding Underground by Emir Kusturica, which was declared a fascist movie by the French daily, Le Monde.) Following an argument with his girlfriend, Juliette (Sandrine Kiberlain), Didier's life falls apart. He is convinced he is being followed by a dark haired man. He thinks everyone is looking at him, just waiting to insult him. He fights with his family. Juliette is fed up and leaves him for another man, a TV director she meets in a park. At a dinner party, Didier is introduced to his shadow, Jerome Sauveur (Laurent Lucas), who could be his double except that he's more handsome and writes better. Didier also encounters a strange young girl, Aurelie (Valentina Cervi), but Juliette soon comes back. All these ghosts of his life keep haunting him, and he finally winds up at the foot of Mont Blanc in rather unpleasant circumstances. Rien sur Robert was screened as part of the Panorama section of the 49th Berlin International Film Festival, 1999. ~ Gönül Dönmez-Colin, Rovi

Critic Reviews for Rien sur Robert (Nothing About Robert)

There are no critic reviews yet for Rien sur Robert (Nothing About Robert). Keep checking Rotten Tomatoes for updates!

There are no featured reviews for Rien sur Robert (Nothing About Robert) at this time.