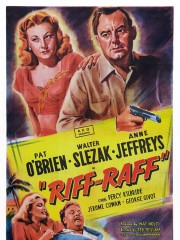 Orlok W
½ January 9, 2015
'Riffraff' finds Pat O'Brien as Dan Hammer, hardboiled private eye, operating in the Canal Zone which when the USA was operating the Panama Canal had a kind of hybrid sovereignty between America and Panama... Great Little 'B' Movie--This little gem is a great surprise! It is well scripted, well acted, fast paced and commands the viewers attention... The Canal Capers!!

3guys 1
February 18, 2012
On occasion I head on over to TCM to see what's on and I walk right into great film that I haven't seen before. This time, I came across Riffraff a little film noir gem that I had never even heard of.
The plot of Riffraff is pretty simple. Two men get on a plane headed for Panama. One of the men has a map to some oil locations in Peru. When the plane lands one of the men is missing along with the map. All kinds of seedy characters want the map. So they all seek out the help of Dan Hammer, (could there be a more perfect name for a noir anti-hero?) the local private eye/man about town.
Apparently this movie is pretty well known for its opening sequence that involves 6 minutes with dialogue but what sets this film apart is that it has some great acting and some dialogue that you just won't see in movies today. Pat O'Brien is great in lead role. He doesn't really look like the classic tough guy but his performance is definitely a highlight.

Walter Slezak does a decent job trying to imitate Sydney Greenstreet and Percy Kilbride is great as the comic relief/older buddy. I was unfamiliar with Anne Jefferys who plays the femme fatale in this one but she really impressed me.
My only complaint is that the missing map is hidden in a location that is painfully obvious and it requires a little bit of a suspension of disbelief in order to accept that the characters don't see the map when it is right in front of their faces.
Riffraff is definitely not one of the bigger budget noir's of its time but it's a great little B movie and well worth the a watch. Unfortunately, after I watched this I did a little digging around and I couldn't find a DVD release for the movie. I found it on VHS on Amazon but I don't know a single person that still has a VCR. Hopefully someone will release this on DVD soon.
Page 1 of 1