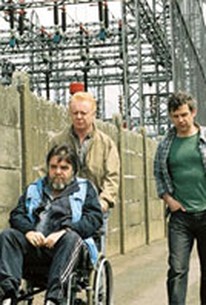 Right of the Weakest Photos

French helmer Lucas Belvaux's The Right of the Weakest - a stark kitchen sink drama with occasional and unpredictable flashes of humor - meditates on the question of when to resign oneself to a sad fate and when to buck the system, even if it means risking everything. This ensemble piece observes the perpetually flagging fortunes of several male steelworkers in a French industrial community whose one bright spot is a regular weekly card game. The men exist at varying levels of despair, but all are losers. They include: Jean Pierre (Patrick Descamps), a wheelchair-bound sad sack who must be carried to the card game; Robert, who lives in the same tenement and exhibits a propensity for waking up at odd hours and drinking himself into a stupor; and Marc (Lucas Belvaux), an assembly line worker at a beer factory whose job involves untangling bottles. Patrick (Eric Caravaca) qualifies as the most impressive of the group (which isn't saying much) - a househusband and college graduate, married and with a son, but one whose economic status sinks rapidly when his wife loses her only means of transportation to work. Ultimately, the men put their heads together and devise a wild method of escaping from the doldrums - which, though improbable, just might be crazy enough to work. ~ Nathan Southern, Rovi

Critic Reviews for Right of the Weakest

The downbeat mood convinces. What might have been tedious becomes an involving and nail-biting thriller.

Underwhelming heist film in which a likable group of unemployed Belgian steel workers plot an armed robbery over their daily card game.

Consistently engaging account of decent folks scraping by in a former steel town builds suspense with a keen eye and a sharp ear for the pride of workers who no longer have work.

A misguided blasphemy of "Bicycle Thief," downloaded through film-noir affectations, this Competition Entrant is morally specious and narratively nonsensical.

The film, in the end, as solidly good as it is, rings a bit hollow, feels a little pointlessly bleak. The last sparks of the steel furnace where Robert and Jean-Pierre used to work have faded, and all that's left is for life to grind itself down.

This solidly acted film struggles to balance its portrait of life amongst the have-nots in contemporary Liege with the melodramatic aspects of a crime thriller.

Belvaux's sympathies for his marginalised subjects are beyond doubt; the film's at its best when observing how the characters' lives are constrained by their environments (adroitly captured by the widescreen lensing).

There are no featured reviews for Right of the Weakest at this time.

Right of the Weakest Quotes