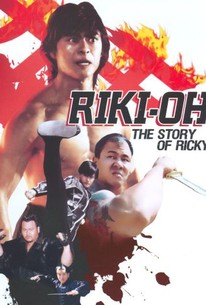 Riki-Oh: The Story of Ricky Photos

This offbeat action drama from Hong Kong stars Bin Shimada as Riki, a new prisoner at a high-tech penal institution of the future. Riki finds himself challenged by the prison's violent, corrupt guards, and when one of his friends is murdered by the jailers, Riki explodes into a fury of violence as he seeks bloody vengeance against all who would cross him. Riki-Oh: The Story of Ricky has won a cult following for its deliberately outlandish martial arts violence, in which Riki displays the remarkable ability to punch through his victims -- and even blow them up.

Gloria Yip
as Keiko
View All

Critic Reviews for Riki-Oh: The Story of Ricky

If you can handle the torrent of grisly violence, you'll find yourself royally entertained by this Hong Kong actioner.

A rather astonishing, starkly stylized blood flood set inside a privatized prison.

A wild martial arts feature that combines a prison movie setting with the sort of gore effects one normally finds in a horror film.

Gore galore but not much more.

You should have been running to the video store before you got to this sentence.

Apart from Ichi the Killer, it is the only live-action film ever to capture the anarchic, excessive, highly stylised violence of manga.

Audience Reviews for Riki-Oh: The Story of Ricky

It may be a grateful attempt at being a visually advanced film at its time (which could be humorous and entertaining once you really get to think about it) the film does no good and ends up looking like a parody, or rather a slapstick of a martial arts film. Ricky-oh: the Story of Ricky is just as predictable and effortless as the effects and misdirections portrayed in the film. 1/5

The Story of Ricky is so ridiculous that to begin criticizing or trying to explain it would almost be missing the point. An entirely entertaining martial arts movie, this movie is so ridiculously graphic and over the top. The dubbing is hysterical to the point where an admittedly very androgynous woman (the one that looked like the guy from Human League) is given a man's voice. And once the Chinese Hulk shows up the brilliance and utter stupidity smash through the ceiling. So much entertaining nonsense you won't be able to stand it.

Riki-Oh: The Story of Ricky Quotes