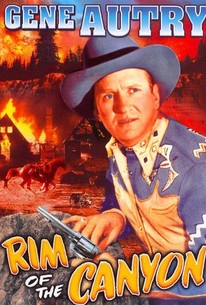 Rim of the Canyon Photos

Gene Autry plays a dual role in the above-average Columbia oater Rim of the Canyon. Our hero plays "himself" and his own father, a famed sheriff. Twenty years ago, Autry Sr. threw a trio of outlaws (Walter Sande, Jock Mahoney and Francis McDonald) into jail for stealing a large sum of money. When the crooks escape and head for the hidden loot, it's up to Autry Jr. to track them down. Unlike previous Columbia Autrys, Rim of the Canyon downplays the musical element in favor of fast, sometimes violent action. Even Autry's faithful horse Champion gets in on the act by trampling one of the crooks. Autry's leading lady this time out is Nan Leslie, later a busy TV character actress; another future TV favorite, Alan Hale Jr., essays a supporting role.

Frankie Marvin
as Cowhand
View All

Critic Reviews for Rim of the Canyon

There are no featured reviews for Rim of the Canyon at this time.

Rim of the Canyon Quotes