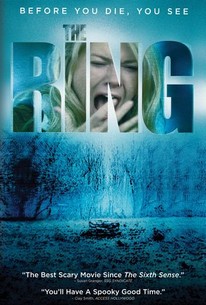 Critics Consensus: With little gore and a lot of creepy visuals, The Ring gets under your skin, thanks to director Gore Verbinski's haunting sense of atmosphere and an impassioned performance from Naomi Watts.

Critics Consensus: With little gore and a lot of creepy visuals, The Ring gets under your skin, thanks to director Gore Verbinski's haunting sense of atmosphere and an impassioned performance from Naomi Watts.

Critic Consensus: With little gore and a lot of creepy visuals, The Ring gets under your skin, thanks to director Gore Verbinski's haunting sense of atmosphere and an impassioned performance from Naomi Watts.

A disturbing videotape appears to hold the power of life and death over those who view it in this offbeat thriller. A strange videotape begins making the rounds in a town in the Pacific Northwest; it is full of bizarre and haunting images, and after watching it, many viewers receive a telephone call in which they are warned they will die in seven days. A handful of teenagers who watched the tape while spending a weekend at a cabin in the mountains scoff at the threat, but as predicted, they all die suddenly on the same night. Rachel Keller (Naomi Watts), the aunt of one of the ill-fated teens, is a journalist who has decided to investigate the matter and travels West with her young son, Aidan (David Dorfman), a troubled child who has been drawing pictures of strange and ominous visions. Rachel managed to find the cabin in the woods and watches the video herself; afterward, she receives the same phone call, and realizes she must solve the puzzle of the video and the person or persons behind it within a week. Rachel turns to her ex, Noah (Martin Henderson), an expert in video technology, who at first is convinced the story is a hoax until he digs deeper into the mystery. The Ring was adapted from a 1996 Japanese film by Hideo Nakata, which became a massive box-office success in Asia and spawned two sequels. ~ Mark Deming, Rovi

Sasha Barrese
as Girl Teen No. 1

Tess Hall
as Girl Teen No. 2

Adam Brody
as Male Teen No. 1

Maura McNamara
as Girl On Ferry

Coleen Maloney
as Mourner No. 1

Catherine Paolone
as Mourner No. 2

News & Interviews for The Ring

View All The Ring News

Critic Reviews for The Ring

Gore Verbinski creates an air of dread that begins with the first scene and never lets up, subtly incorporating elements from the current wave of Japanese horror films along the way.

The filmmakers have wisely stayed close to the original's mood, which is somber and flat, with quick (near-subliminal) inserts and a soundtrack full of watery-grave groans and murmurs.

An edgy, watchable film, but one that makes you feel more squeamish than screamish.

The Ring, about a videotape that kills people, is so full of inconsistencies and plot holes that I stumbled from a recent screening with few answers, and a ton of questions.

Watching The Ring won't kill you, but it could bore you half to death.

I hated it, but I grant that it does tap into a vein of technological horror -- the fear of the VCR! -- that will have young videophiles chatting it up for weeks.

A thoroughly prosaic and prototypical spooker that commits the cardinal sin of devaluing what made the raw materials of its fable so original and powerful in the first place.

This remake of a hugely successful Japanese horror film is very well acted by Naomi Watts. It's just not that scary.

A very strong movie in all the ways you need a horror movie to be strong. But it is a movie that could very obviously be better.

One of the most intelligent and genuinely scary ghost stories to come around in a long time.

The Ring doesn't have the wiliness or conviction to exploit either a single mother's guilt over child neglect or our collective queasiness over potential bad seeds. It merely alternates these themes and toys with them.

Audience Reviews for The Ring

A good horror film with a cool concept. Very creepy and a bit strange but it has a good mix of everything and is one of my fave horrors!

Let's face it, horror films are always going to get remakes. There is no way around that statement, because whether it was made in a foreign country and praised, or frankly just made as an American film 10 or 20 years ago, studios will always want to rejuvenate what made them buckets of cash in the past. There are cases like Blair Witch, where it was practically hated by everyone and was completely unnecessary, and then there are instances like Let Me In, where it does nothing to diminish the original, but its sole mission is just to bring its story over to another language and display a great story for a wider audience. That is exactly how I feel The Ring was handled back in the day, and still remains to be one of the better horror remakes. What makes these remakes less special, will always be their need to follow the original beat for beat. Yes, this film was pretty much just a translation from the Japanese version, but when it begins and ends almost in replication, it can be a little predictable for viewers who have seen the original. Once again following a woman who has watched a video tape and receives a phone calling telling her that she will die in seven days, a mystery begins to unfold about whether or not it's true. There are certain additions that I thought added some terrific tension, specifically the fact that the drawings aspect was handled in much more detail here. Sadly, almost every enjoyable aspect of this film has already been done before. While I will defend this film for being extremely effective and will defend anyone who calls this their favourite horror film, the portions that are meant to frighten audiences, are done in a way that is not quite as scary as the Japanese film, Ringu. The close-ups done in that film, relying solely on what could be done to the human body in order to terrify people, was truly scary. This time around, prosthetics are used on everyone and it took away from something that I found to be scarier in the past. Having said all that, the cinematography, along with the prosthetics and top-notch effects for its time, really does make this a worthy remake. When this film was released back in 2002, Naomi Watts barrelled onto the big screen, all guns blazing. Her shrieks and frightening faces truly made you feel as though you were watching someone go through these horrible events. I think they casted the perfect person to portray the leading lady here. I may not be a hug fan of horror films, but I can certainly recognize when they are done with class. The Ring casts the right talent to play off of each other, so that when the terror does happen, it feels genuine. Like Ringu, everyone on-screen seems to be giving their all and truly caring about the characters they are portraying. In the end, all this film really needs to do is tell the story of Ringu in a classy way that would bring in a new audience and please fans of that original film as well. Personally, The Ring does just that and really does make for a creepy film overall. Not comparing this to the film that proceeded it, this film truly is something special for the horror genre. Instead of slashing up people in the woods or playing mind games with someone, The Ring takes its time to build tension so that you feel the payoff works in the final act. I love the original, so due to the fact that it is a little too similar to the original and doesn't try enough new things, I can call this a very solid film. Yes, I feel the same way about films like The Girl With The Dragon Tattoo. Still a great film on its own, but it wouldn't exist without the original.

Naomi Watts makes a good performance, but overall this movie is very disappointing. The story is rather predictable other than the plot twist at the end, but the direction of the movie makes the surprise all the less surprising. From the beginning when the two young girls are teasing each other about the urban legend about the tape, you're given the clue the director is going to tease you by presenting suspense only to turn around and say everything is just a joke. The buildup is somewhat entertaining but the conclusion is quite rushed and leaves you with an empty feeling. The relationship between the characters is almost nonexistant, you're given no indication of any connection between Rachel and her son other than she's his mother. Most of the interaction occurs between Rachel and Noah, but even that relationship is distant and uninteresting. I found the Japanese version to be much more scary and enjoyable. 2 1/2 Stars for the USA version. Updated 2-16-2004

An urban legend says that seven days after watching a mysterious videotape, you will die; a journalist investigating the phenomenon has a week to figure out the secret behind the tape. Well-made, satisfying horror-thriller about viral vengeance from beyond the grave.