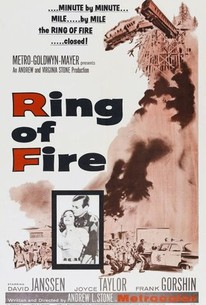 Featuring footage from two real forest fires seamlessly edited into the story's nail-biting climax, this thrilling crime drama chronicles the redemption of three young punks who are captured by a local sheriff while robbing an Oregon gas station. Unfortunately, during the arrest, the propitious lawman neglects to check the female crook for weapons and she whips out a gun. The three delinquents then take him hostage. They then head for the forest to spend the night. The female tries unsuccessfully to seduce the cop. The next morning one of the guys wants to kill him, but instead dies himself. Meanwhile a search and rescue team looks for the missing sheriff. They crooks are captured and the young boy claims that the cop raped the young girl. A heated argument ensues. The fire begins when the young boy throws a lit cigarette upon the ground. As a result of his thoughtlessness, a town is endangered and must somehow be evacuated before a terrible disaster ensues.

Critic Reviews for Ring of Fire

There are no critic reviews yet for Ring of Fire. Keep checking Rotten Tomatoes for updates!

There are no featured reviews for Ring of Fire at this time.