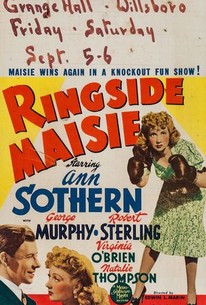 Broke and stranded once more, golden-hearted showgirl Maisie Revere (Ann Sothern) finds herself in upstate New York in general proximity with a prizefighting camp. She meets and ultimately falls in love with up-and-coming boxer Terry Dolan (played by Ann Sothern's future husband Robert Sterling). Upon realizing that her heart belongs to Terry's manager Skeets Maguire (George Murphy), our heroine finds herself on the horns of an emotional dilemma-especially after Dolan is blinded in a fight, possibly permanently. The film's best moments belong to "Slapsie" Maxie Rosenbloom, typecast in his usual role of a pugilist who's suffered one too many blows to the cranium. Also worth the price of admission is Maisie's opening dance-hall scene, highlighted by the terpischorean skills of the star.

May McAvoy
as Day Nurse

Rags Ragland
as Vic
View All

There are no critic reviews yet for Ringside Maisie (Cash and Carry Maisie). Keep checking Rotten Tomatoes for updates!

Maisie's back at it! Getting mixed up in people's lives and straightening them out with her special brand of common sense, looking like a million bucks while doing it. This has a bit more drama than usual and would have benefited from a better leading man than Murphy but it's a solid entry in the series.