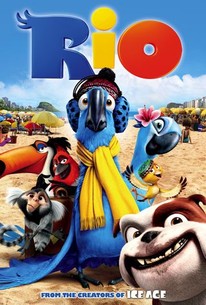 From the makers of the hit Ice Age series comes Rio, a comedy adventure about taking a walk on the wild side. Blu is a domesticated Macaw who never learned to fly, living a comfortable life with his owner and best friend Linda in the small town of Moose Lake, Minnesota. Blu and Linda think he's the last of his kind, but when they learn about another Macaw who lives in Rio de Janeiro, they head to the faraway and exotic land to find Jewel, Blu's female counterpart. Not long after they arrive, Blu and Jewel are kidnapped by a group of bungling animal smugglers. With the help of street smart Jewel, and a group of wise-cracking and smooth-talking city birds, Blu escapes. Now, with his new friends by his side, Blu will have to find the courage to learn to fly, thwart the kidnappers who are hot on their trail, and return to Linda, the best friend a bird ever had. -- (C) Fox

Tim Nordquist
as Other Hang Glider

Michael Dean Ester
as Boy in Gondola
View All

I've never heard an adult say, "I must go see that film. It has Jesse Eisenberg's voice in it." They could have spent the money on something else, like a better story.

Rio is a beautifully animated family frolic sure to keep the little ones joyfully content.

Rio is a brightly-colored, dizzying pinwheel of 3D animation in which nothing much happens. Sounds like summer is here early.

Carlos Saldanha's sincere but uninspired romp into the glossy postcard atmosphere of Rio de Janeiro is one long courtship that ultimately falls flat.

The plotting here is of the set-up-the-pins-and-knock-them-down variety, so you'll pretty much predict every grinding of the script's gears.

With Blu and Jewel chained together (like the hero and heroine of The 39 Steps), there are thrills, spills and gags galore.

This is one film that you won't necessarily regret paying the extra bucks for the extra bursts of color and animation.

I found it quite charming.

This isn't revolutionary animation, but it's warm, sincere and huge-hearted. I was dazzled by all the colors; your kids are gonna go nuts for them.

While it may entertain the kiddies for a while, for the older folks out there (and that means anyone 10+), Rio is just another animated yawner.

Comical, colorful, wonderfully cast and beautifully animated, "Rio" is the first Blue Sky movie that could be compared to the best of Pixar.

Rio follows the story of a blue macaw named Blu (Jesse Eisenberg), being the last of his species who is taken to Brazil to mate with another found female Blue Macaw named Jewel (Anne Hathway,) to restart the breed of macaw. The two are somehow kidnapped and discover that they are going to be sold for a major fortune. The two escape after the kidnappers bird Nigel (Jermaine Clements) accidentally takes his eye off them for too long. Now the two birds have to learn how to get along and find there masters and restart the race of Blue Macaw. Rio has probably some of the best animation I've seen in a while. This animation seriously matches up with Illumination studios and Dreamworks, and that's saying a lot from the people who made Ice Age, Robots, and Horton Hears a Who. The colors and lighting in this film really do shine and make this probably one of the most vibrant looking animated films I've ever seen, and in 3-D this film just looks incredible and just pops out. The animation and lighting for the musical numbers also pop and look just as vibrant and colorful as say Cats Don't Dance, or even some Disney movies like Oliver and Company. Now in terms of animated films voice acting is one of those delicate things that has to be held with caution. Now animated films have done poorly in terms of entertaining me when it comes to the voice acting, *FLAME SHIELD* such as Happy Feet, with some of the most annoying singing voices and voices i've heard in an animated film. Or Hoodwinked Too Hood vs. Evil, which has probably the most obnoxious villain voices in the world not to mention one of the worst and most obnoxious animated film plots of all time. But thankfully, Rio doesn't fall in this category in the slightest, in fact without a lot of these voices, I couldn't see this film doing that well. Anne Hathaway, Jesse Eisenberg, Will. I. Am, Jamie Foxx, Jermaine Clements, George Lopez all do incredible jobs, and without these voice actors, the songs in this movie would be nowhere near as good as they were. Each voice was picked very well and just match these characters very well, unlike the Blue Sky movie Robots, which many of the voices just seemed to be picked due to how popular these actors were and not due to how well their voices suited the characters and were just flat out annoying and forgettable performances *CoughHalleBerry CoughPaulGiamatti.* Now the musical numbers.....MY GOD!!! This movie has probably the best original soundtrack I've ever heard in a film in my entire life. The energy, the lighting, the vocals, they just are all blended together perfectly in these musical numbers and truly just match the environment in this film and just look and sound incredible. Special mention to my favorite song in the film being hot Wings done by Jamie Foxx and Will. I. Am. The sheer look and energy put into this musical just show how much effort these animators put into this film and how much effort that Foxx and Am put into this song and how much fun they clearly had working on this. Also Anne Hathaway already being a great singer does a great job singing with Jesse Eisenberg who up to this point hadn't had little to no singing experience. The only real song I didn't like was surprisingly Nigels song, done by Jermaine Clements. The main reason I find this shocking being the fact that Clements is well known as being one of the lead singers in the duo singing group The Flight of the Conchords, and does have professional singing experience and has for a while, but his song just really annoys me and I don't really see much of a beat in this song. But other than that song these songs are the best I've heard in a film in a while if not of all time. Overall Rio is like its music, beautiful, entertaining, colorful, and well sung. I highly recommend this movie to anyone who loves vibrant musicals or just fans of animation in general, you will not be disappointed.

A cute, entertaining yet forgettable animation with too many clichés and whose charm lies in its exuberant visuals and an exotic (but clichéd) composition of a Rio de Janeiro full of samba and colors. It is only sad, though, that the story is so conventional and never more than ordinary.

Sweet and innocent all around, "Rio" is the type of kids film that usually only comes around once or twice a year, and is both equally for children, teenagers, and adults alike. Although the feel of the picture is very childish, but the heart and motives behind each character, whether or not it is an animal or human, feels very genuine. The story follows one of the two last Blu Birds in the country, and they must be united to birth new life into their species. Many lessons will be learnt for kids and many emotional moments and adult humour will be shared for adults. It's not groundbreaking animation, but it is beautiful to look at as always, and it's a very fun film to boot. I will remember this short a sweet story for years to come, and recommend it to families of all ages. "Rio" is a lot of fun!

a standard, well drawn kids movie that parents would never watch alone, but wont mind sitting through from time to time. decent humor and an entertaining story.