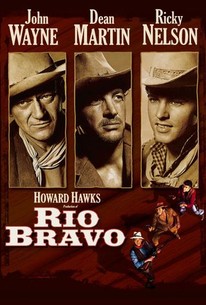 Critics Consensus: Rio Bravo finds director Howard Hawks -- and his stellar ensemble cast -- working at peak performance, and the end result is a towering classic of the Western genre.

Critics Consensus: Rio Bravo finds director Howard Hawks -- and his stellar ensemble cast -- working at peak performance, and the end result is a towering classic of the Western genre.

Critic Consensus: Rio Bravo finds director Howard Hawks -- and his stellar ensemble cast -- working at peak performance, and the end result is a towering classic of the Western genre.

Set in Texas during the late 1860s, Rio Bravo is a story of men (and women) and a town under siege. Presidio County Sheriff John T. Chance (John Wayne) is holding Joe Burdette (Claude Akins), a worthless, drunken thug, for the murder of an unarmed man in a fight in a saloon -- the problem is that Joe is the brother of wealthy land baron Nathan Burdette (John Russell), who owns a big chunk of the county and can buy all the hired guns he doesn't already have working for him. Burdette's men cut the town off to prevent Chance from getting Joe into more secure surroundings, and then the hired guns come in, waiting around for their chance to break him out of jail. Chance has to wait for the United States marshal to show up, in six days, his only help from Stumpy (Walter Brennan), a toothless, cantankerous old deputy with a bad leg who guards the jail, and Dude (Dean Martin), his former deputy, who's spent the last two years stumbling around in a drunken stupor over a woman that left him. Chance's friend, trail boss Pat Wheeler (Ward Bond), arrives at the outset of the siege and tries to help, offering the services of himself and his drovers as deputies, which Chance turns down, saying they're not professionals and would be too worried about their families to be good at anything except being targets for Burdette's men; but Chance does try to enlist the services of Wheeler's newest employee, a callow-looking young gunman named Colorado Ryan (Ricky Nelson), who politely turns him down, saying he prefers to mind his own business. In the midst of all of this tension, Feathers (Angie Dickinson), a dance hall entertainer, arrives in town and nearly gets locked up by Chance for cheating at cards, until he finds out that he was wrong and that she's not guilty -- this starts a verbal duel between the two of them that grows more sexually intense as the movie progresses and she finds herself in the middle of Chance's fight. Wheeler is murdered by one of Burgette's hired guns who is, in turn, killed by Dude in an intense confrontation in a saloon. Colorado throws in with Chance after his boss is killed and picks up some of the slack left by Dude, who isn't quite over his need for a drink or the shakes that come with trying to stop. Chance and Burdette keep raising the ante on each other, Chance, Dude, and Colorado killing enough of the rancher's men that he's got to double what he's paying to make it worth the risk, and the undertaker (Joseph Shimada) gets plenty of business from Burdette before the two sides arrive at a stalemate -- Burdette is holding Dude and will release him in exchange for Joe. This leads to the final, bloody confrontation between Chance and Burdette, where the wagons brought to town by the murdered Wheeler play an unexpected and essential role in tipping the balance. ~ Bruce Eder, Rovi

Bob Terhune
as Charlie the Bartender

Howard Hawks' direction is almost flawless with a tempo that injects humor, some dry some raucous, as a handy antibiotic for the story's frequent feverish outbursts of violence.

To watch Rio Bravo is to see a master craftsman at work. The film is seamless. There is not a shot that is wrong. It is uncommonly absorbing, and the 141-minute running time flows past like running water.

Wayne, of course, walks off with the show -- not by doing anything in particular, but simply by being what he is: at 51, still one of the most believable he-men in Hollywood.

Rio Bravo is a soft, slack, not very rousing Western by a man (Howard Hawks) who knows better, having supervised a nearly endless chain of masterful journey films.

'Rio Bravo' is one of the clearest samples of what could be called "Hawks style", a pinnacle of one of the three genres that the Indiana director handled with enviable style and ease: the western. [Full Review in Spanish]

Director Howard Hawks, who made Red River in 1948, has come up with another big, handsome and entertaining western.

It's long but involving, with an unexpectedly good performance from Dean Martin.

Underrated at the time of its release, this majestically paced western is one of the finest achievements of the genre and stands as a career-best for many of its participants.

A wonderful good-old-fashioned Western that is compelling and amusing, blending humor and drama in a multilayered story centered more on the complex characters than on the action - and it has a lot of memorable dialogue and a perfect pace that is careful but never slow.

One of the most entertaining and fun film experiences you'll ever have. Wayne, Martin & Brennan really shine in this one. Some of the best dialogue I've ever heard.

An entertaining classic. Sure, to an extent, it's a vehicle for Ricky Nelson - toward the end, we get some very anachronistic country music! - but overall, it's a simple film in which John Wayne does his usual thing (as the sherriff), Dean Martin shines as a drunk struggling to get it together, and luminous Angie Dickinson and her legs-right-up-to-her-neck win the seen-it-all-sherriff's heart. I liked the way in which everyone in town was trapped, in a sense, and the tension that comes from having the barbarians - Burdette's gang - at the gate all the while. The title wasn't the best one, but there's so much in this movie, I don't know what you'd call it: laughs, love, action and drama combine to make an enjoyable film. It doesn't "hit hard," but it's definitely a hit.

John T. Chance: You want that gun, pick it up. I wish you would.  "You've seen nothing like 'em together... and in the heat and hate of Rio Bravo nothing can tear 'em apart!" Rio Bravo is a film that defines the Western genre, maybe more than any other does. It has everything that the makes the genre great. It has tough leader, with two under respected helpers against a lot of bad guys. Then comes the young gunslinger to help out the undermanned sheriff. The setting looks great as a backdrop to the violence that ensues. It may be a tad bit longwinded, but the actors and plot will keep your attention for the 140 minute runtime. At the beginning of the film, Chance arrests Joe Burdette for murder and locks him in the local jail. Joe's brother assembles a team to of hired hands to watch the town and make sure that the sheriff can't take Joe away from the town. Soon, a battle ensues between the authorities and Burdette. This plot has been used a million times since Rio Bravo, but never has it been done as well as it was here.  This isn't my favorite Western, nor is it my favorite John Wayne movie, but it is one of the best in both categories. If you're a fan of the genre, there isn't much you can find to complain about here. It's right up there with Stagecoach, Once Upon a Time in the West, and The Good, the Bad, and the Ugly, when talking about the best of the genre. What makes it so great is Howard Hawk's wonderful direction and a big name cast that includes John Wayne, Dean Martin, and Ricky Nelson. Rio Bravo is a must see for the casual and die hard film fan alike. There's a reason it has acquired its status as a genre masterpiece.  John T. Chance: Sorry don't get it done, Dude. That's the second time you hit me. Don't ever do it again.