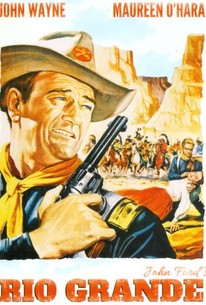 The last entry in the John Ford-John Wayne "Cavalry Trilogy," this film stars Wayne as Lt. Col. Kirby Yorke, whose devotion to duty has cost him his marriage. When Yorke's son Jeff is assigned to his father's post, Yorke is determined not to afford any preferential treatment to the boy.

Patrick Wayne
as Boy
View All

It's a forgettable Ford western. [Full review in Spanish]

despite all that talent behind the camera, Rio Grande still strikes one primarily as a film that Ford just wanted to get done

Popular entertainment from a complicated time made by strong personalities with contradictory beliefs.

John Wayne is excellent, even if this Kirby Yorke seems different from the one in Fort Apache.

While nowhere near an essential showcase for Ford or Wayne, and a complete waste of O'Hara, Rio Grande is still a generally enjoyable conveyor-belt western.

I like it better than the problematic Fort Apache; it's far simpler and more effective.

In this Ford's Western, part of a trilogy that also includes She Wore a Yellow Ribbon, Wayne gets to play the tough biological and sociological father of his recruits, which include his son.

A minor but enjoyable John Ford and John Wayne collaboration.

Though the least impressive of Ford's three "Cavalry" films, this still is a great film.

The true sequel to Fort Apache in that you get to see what happens to Yorke and the remaining troops. This is a lot more of a relationship based movie than the other two, maybe that's what makes it so powerful. John Wayne's performance is even stronger this time around and he plays such a timeless character. The father/son storyline is such a classic representation, but so well done that it doesn't feel stale. John Ford truly is the greatest pioneer in film-making and took all the risks and leaps that no one else dared to do.

Director John Ford agreed to make this one in a deal with Republic Pictures to secure financing for his pet project, The Quiet Man. Never one to do things half-ass, Ford secured a rather large budget and a top notch supporting cast for his two stars, John Wayne and Maureen O'Hara. Rio Grande isn't Ford's most popular or most acclaimed film, but it's hard to deny it's prototypical old-west charm.

As many people know, Rio Grande is the third installation of John Ford's sweeping "Cavalry trilogy*," his paean and dirge for the forging of the West after the Cival War. In each, there is Indian fighting, romance and Monument Valley. Younger officers look forward to winning glory in the Indian Wars while the older, veteran officers who served in the Civil War are tired of fighting and would rather keep the peace instead. And the enlisted men coming from all walks of life, some running from something, others trying to find something, but all taking war and peace as they come. They want to stay alive, but aren't too worried about dying. Unlike the first two cavalry films, Rio Grande focuses more on the love between an Army officer and his wife, and the pain his life causes her. This pain is made even worse by the fact that their son has chosen to follow his father's way of life, and winds up serving in his father's command. When, as is inevitable, Indians flee their reservation, the family becomes embroiled in war against the Apaches (whom, everyone knows, were the toughest, most ruthless and evil Indian fighters of them all := ). This is where Ford starts to swerve away from ordinary westerns. While his Indians are fierce and tough, Ford tries to show in all the Cavalry films that they are also honourable and fighting for home and family, not because they are evil. And while Wayne's character must pursue his Indians until they're either captured or dead, he is not without both sympathy and respect, and with the knowledge that it is the white man's treatment of them that is at the heart of the war. It's more than certain that John Ford has become my favorite director. His ability to make stories with depth, compassion and remarkable truth has caused his films to last. I hope that you will see all of the Cavalry Trilogy, and then seek out all of his other films. *The other films in the trilogy are Fort Apache (1948) and She Wore A Yellow Ribbon (1949).