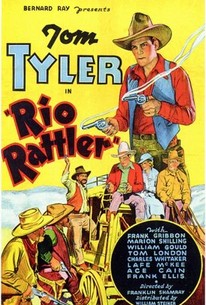 Directed by producer Bernard B. Ray under his usual nom de cinema of Franklin Shamray, this mild B-Western features Tom Tyler and sidekick Eddie Gribbon befriending a ranger (Tom London), whose murder by a mysterious villain known as "The Rattler" they then seek to avenge. As Tyler and Gribbon learn, "The Rattler" is in the employ of nasty William Gould, who tries to frame Tom in the attack of prospector Jimmy Aubrey. But Tom manages to persuade the dead ranger's sister (Marion Shilling) of his innocence and the real culprit (Charles "Slim" Whitaker) is apprehended. According to some reports, this obscure Western was released without the all-important seal of approval by the Motion Picture Association of America and only played the hinterlands.

There are no critic reviews yet for Rio Rattler. Keep checking Rotten Tomatoes for updates!

There are no featured reviews for Rio Rattler at this time.