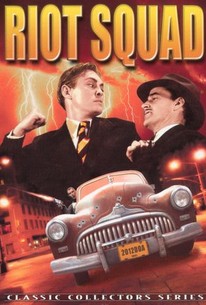 This Monogram quickie stars Richard Cromwell as Dr. Tom, an idealistic young tenement-district physician. When his best pal, a police captain, is killed by gangsters, Dr. Tom offers his services to the authorities in hopes of bringing the villains to justice. Working undercover, our hero becomes a gangland physician, gaining the confidence of mob boss Gruszo (John Miljan). Forced to reveal his true identity when the heroine's life is in danger, Dr. Tom nonetheless manages to alert the Riot Squad, who arrive Cavalry-style in the nick of time. Featured in the cast is 8-year-old Mary Ruth, a modestly talented moppet whom Monogram was briefly grooming as the "next Shirley Temple."

Arthur Space
as Butch
View All

There are no critic reviews yet for Riot Squad. Keep checking Rotten Tomatoes for updates!

There are no featured reviews for Riot Squad at this time.