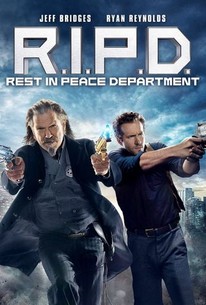 Critics Consensus: It has its moments -- most of them courtesy of Jeff Bridges' rootin' tootin' performance as an undead Wild West sheriff -- but R.I.P.D. is ultimately too dim-witted and formulaic to satisfy.

Critics Consensus: It has its moments -- most of them courtesy of Jeff Bridges' rootin' tootin' performance as an undead Wild West sheriff -- but R.I.P.D. is ultimately too dim-witted and formulaic to satisfy.

Critic Consensus: It has its moments -- most of them courtesy of Jeff Bridges' rootin' tootin' performance as an undead Wild West sheriff -- but R.I.P.D. is ultimately too dim-witted and formulaic to satisfy.

Jeff Bridges and Ryan Reynolds headline the 3D supernatural action-adventure R.I.P.D. as two cops dispatched by the otherworldly Rest In Peace Department to protect and serve the living from an increasingly destructive array of souls who refuse to move peacefully to the other side. Veteran sheriff Roy Pulsifer (Bridges) has spent his career with the legendary police force known as R.I.P.D. tracking monstrous spirits who are cleverly disguised as ordinary people. His mission? To arrest and bring to justice a special brand of criminals trying to escape final judgment by hiding among the unsuspecting on Earth. Once the wise-cracking Roy is assigned former rising-star detective Nick Walker (Reynolds) as his junior officer, the new partners have to turn grudging respect into top-notch teamwork. When they uncover a plot that could end life as we know it, two of R.I.P.D.'s finest must miraculously restore the cosmic balance...or watch the tunnel to the afterlife begin sending angry souls the very wrong way. (c) Universal

John Burke
as Newscaster in Helicopter

Please, please don't see it. Value your time more than I did.

Overall, it's a directionless mess: too expensive for a B-movie, too grown-up for a kids' movie (funerals, bereavement and jokes about Steely Dan) and too infantile for everyone else.

Who thought this was a good idea and why are they still allowed out alone at night?

Bridges (gorgeous and effortlessly leftfield) has saved many a dire film. He tries to hold the fort but it just can't be done.

[A] goofy and derivative supernatural action-adventure, based on a comic-book series by Peter Lenkov.

So generic a cut-and-paste job is the film's every aesthetic cue, it's surprising to even find a director's name surface in the closing credits.

Admit it. It even sounds stale.

Starts very solidly, but goes very soft by the end.

It is among the worst examples of what comics on film have left us over the years. [Full Review in Spanish]

R.I.P.D. is a movie that suffers from a passel of lost opportunities.

Based on a comic book that literally had to be better, writers Phil Hay, Matt Manfredi and David Dobkin did director Robert Schwentke no favors, but Schwentke directed The Time Traveler's Wife, so he had it coming.

R.I.P.D. tries desperately to capture the same blend of action and comedy that worked so well in the "Men in Black" series, but the film only proves how difficult that balance really is.

** I've heard this compared to "Men in Black" a lot. While the premise is similar, "Men in Black" is a much better movie. Here, Jeff Bridges and Ryan Reynolds star as officers for the R.I.P.D(Rest in Peace Department). They basically fight dead people who shouldn't be on Earth anymore. I'd say in some ways this has more in common with "Ghost" than "Black" because of Reynolds trying to contact his wife. There is some good humor, but the story is weak and the effects aren't up to the standards that most movies have nowadays. Although I will say, the city being torn apart towards the end is pretty impressive. But the dead people look very fake. I'd say kids will probably enjoy this some for its campy nature, but really, it's just not a very good movie. Not unwatchable, but you'll end up wishing it were better.

So I found out this film is based on a Dark Horse comic book which instantly got me somewhat excited truth be told. Yeah I heard all the negative buzz flying around about the film, bad reviews, the fact it bombed blah blah blah...but as we all know you should always see the film and make your own decision right. So yeah I was pretty curious about the whole thing mainly because of the premise which seemed dark and cool. It felt a bit familiar with another certain film sure but I put that to the back of mind. Well that didn't work, no sooner has the main character been killed and sucked into plain waiting room, the 'MIB' copyright stands up marches down to you and slaps you across the face!. But wait there's more, this isn't just a complete rip off of 'MIB' (could almost be a sequel/prequel), there are heavy elements taken from various other films like 'Hellboy' 'Ghostbusters' and 'Beetlejuice' with all the paperwork and bureaucracy of the afterlife...to a degree. In general I really got the impression nothing had been fully thought out here, there are some nice ideas, hell the whole plot is fun enough but its been made poorly. First off nothing is really explained too well, why exactly do dead people who don't manage to make it to judgement turn into monstrous ghosts over time? they seem to decay, why?. While I'm talking about them how come the living can see them?! they are ghosts right. Then there is the terrible way the main characters can mingle amongst the living and not get recognised by people that may have known them when they were alive. Again they are ghosts, how come the living can see them plus the fact they look like different people or have new bodies just came across as lame and cheesy. I realise being a ghost doesn't mean you can never be seen, heard or cause damage but all these characters just act as though they aren't dead, you'd never guess this was about ghosts if you didn't know. Everything seems so wafer thin in conception, there doesn't appear to be anything in place to stop the living finding out about the afterlife and all the monsters. When some ghost monsters run amok downtown that's it, everybody knows about the paranormal being true, no going back, the cats out the bag. On top of that I can't believe that kind of thing has never ever ever happened before, really? with all those huge crazy ass ghost monsters...never ever?? come on you're shitting me. The whole structure of the plot seems so fragile, one pick and it topples. The gold pieces that form that religious statue thingy, it opens up lots of typhoon-like storms and somehow makes all dead people come back to the realm of the living...wut??. Why would someone create such a device? what would be the point of it? how would anyone benefit? and why doesn't God do something seeing as the film hints at an almighty power above (and below). So much more could of been done, when 'Nick' arrives in the Boston division of the Rest In Peace Department, the entire reason behind what has just happened (his death) is explained in about five minutes. No sooner is he told he accepts everything and joins the R.I.P.D. without a moments thought, no questions, no disorientation...nah he's good. We don't really see any background action or characters in the afterlife, there is nothing going on, its totally bland and boring mainly because they are trying to copy that Will Smith film. The interior of the Boston Division is seriously taking the piss with the pinching of ideas Jesus! it may well be close to the source material (or not) I don't know, but visually its virtually a copycat. Now I'm not saying the film had to be quirky and kooky like 'Beetlejuice' but its simply screaming out for some depth, something other than plain white walls and grey office furniture. Its not all bad, as said there are some nice bits. I did like all the cops from different eras within the R.I.P.D., the handguns are quite neat looking and Bridges does play the rootin' tootin' yeehaw! wild west lawman to a tee for sure (if you can understand him, sounds like he's got a gob full of tobacco). Naturally I COULD compare his character to the grizzled 'Agent K' and on the same note I could compare the wet behind the ears Nick to 'Agent J'...but that's way too obvious. I could mention other scene for scene sequences but its not worth it, you only need to watch the trailer to get the gist, this feels like the low budget version of 'MIB'. Yep that's right I said low budget, the film generally looks awful with shoddy CGI, uninspired ghostie monsters, cheap looking sets, costumes and above all errr...shoddy CGI. The CGI would have looked great about maybe ten years ago. Oh anyone notice there isn't anyone around in the city street sequences towards the end, totally deserted! where has the population gone?!. I hate to say it but it does look like an average video game, the old cliche I'm afraid. Looks like the critics are right with this one, a pretty poor looking formulaic CGI filled shambles that is clearly heavily influenced by many things (or was it the comic book that was heavily influenced?). Had this gone straight to DVD then you could look on it more favourably. On the other hand had it come out before 'MIB' over sixteen years ago, you could also look on it way more favourably. But as a major summer blockbuster release?! with those visuals!! come on guys seriously.

fairly poor, like a bad men in black meets ghostbusters.

To protect and serve the living. Good movie! There is plenty action and a fair amount of comedy. there were some plot holes and the ending left a few unanswered questions. This is not a blockbuster or a classic movie, I would classify it as a good popcorn flick. Contrary to many other opinions here we both recommend this as a watchable movie, as long as your expectations are reasonable. A recently slain cop joins a team of undead police officers working for the Rest in Peace Department and tries to find the man who murdered him.