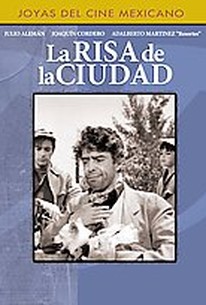 Hampered by a low budget, this otherwise well-acted and excellently directed drama (Gilberto Gazcon is at the helm) takes an understanding look at a group of people living on the fringe of Mexico City in their own squatters' community. They are street entertainers who go out during the day and perform at many of the touristy spots, their glamorous backdrops belying the way they really live. Their group leader, of sorts, is young Beto (Joaquin Cordero) who huffs and bluffs his way along until one day an older man, Don Tencho (José Elias Moreno) shows up and joins the community. Although he does not let on, he is really Beto's grandfather. Don Tencho subtly begins to instill the performers and the pickpockets among them, with bits and pieces of dignity and integrity. The results are not really surprising, but they are engaging and include a few twists and turns of fate. ~ Eleanor Mannikka, Rovi

There are no critic reviews yet for La Risa de la Ciudad. Keep checking Rotten Tomatoes for updates!

There are no featured reviews for La Risa de la Ciudad at this time.