Rise of the Footsoldier2007 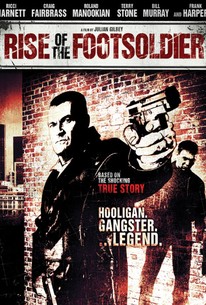 Rise of the Footsoldier Photos

Julian Gilbey's fact-based crime saga Rise of the Footsoldier traces one man's meteoric ascension from a lucrative soccer career, through the ranks of organized crime, to the status of Britain's most omnipotent drug lord. The tale begins in the 1970s, when hooligan Carlton Leach (Ricci Harnett) finds himself implicated in a series of violent skirmishes on the soccer fields of England. Prompted to leave this activity and enter another trade, Leach self-incorporates as a company called ICF - a front for the young entrepreneur's drug-dealing activities. Soon, Carlton's business flourishes - first with cocaine, then with ecstasy and heroin (as time rolls forward from the self-serving 80s into the 1990s), but with it comes severe addiction and, disturbingly, wave after wave of nerve-wracking violence. More hardened, more severe criminals turn up to do business with Carlton's associates, forcing Carlton to recruit tougher and more psychopathic elements to protect himself - particularly when the goods from a heroin shipment disappear and Turkish thugs begin closing in.

Mark Killeen
as Terry
View All

Critic Reviews for Rise of the Footsoldier

Footsoldier doesn't so much pack a punch as leave you feeling violated and more importantly, robs you of two hours of your life you won't get back.

The direction smacks of sadism, especially the obvious glee Gilbey gets from filming violent scenes in close-up and, in the case of the bloody shotgun-to-the-face denouement, in triplicate.

A peculiar but decidedly ordinary addition to the British thug genre.

Fans of British geezer films would be better off checking out I.D. - this is best enjoyed after a night at the pub on DVD.

The filmmakers' wide-eyed attempt to turn Leach into a living legend will probably rattle Daily Mail readers' cages; everyone else may find its stonking hard-on for real-life hard men slightly ludicrous.

Gore-flecked rucks and bruising rumbles are the order of the day in this unflinching portrait of a demi-monde your really rather wish would stay that way.

Audience Reviews for Rise of the Footsoldier

A pretty good film, The half hour was the best for me and then it just kind of got very dark and pretty gruesome at times, I know it was based on true events so they couldn't really change it, Worth a watch if you like british gangster films.

This film is certainly more in your face than a lot of British Gangster films and obviously based on a true story (some people may remember links from the film ?Essex Boys? although, a lot of that film was fictional). I suppose we hear a lot about East End gangster, or London Gangsters in general, but not so much about the Essex underworld. When casting for this film they didn?t exactly choose Actors who resembled the characters in looks, particularly in the case of Carlton Leach and the low budget shone through at times, particularly with the wigs, but it?s a brave attempt for a film of it?s genre and extremely informative if you are a fan of true crime stories. Some pretty shocking scenes (in terms of real life violence) from start to finish.

A truly horrible film on all levels. It starts off as some Football Factory wannabe following the exploits of some very unlikeable bloke who just swears, womanisers, doesn't do drugs but then does and uses excesive violence because his flowers didn't bloom this year or something. The film is so uninspired it decides to just cast people from Football Factory. At some point while I was laughing at this films attempts to be 'hard' it turned into a gangster film with the main character thrown out and now following even less liekable chaps. Though I'm confused because one of the truly horrid gentleman wasn't so bad before but now the main character is the voice of reason without any explanation to this sudden change. Violence tries hard to be shocking but just increases this embarrassment of British cinema. I don't demand people must be good but they should have some humanity, especially when it gets to the point where I don't care if these gangsters families are killed by other gang members, let 'em.

Yeaaahhhh. A good ole brutal, bloody, shameless (on all levels) Brit gangster movie. Which also happens to be the a real good authentic biography of one of Englands most brutal and toughest criminals, Carlton Leach. Hell YEAH! This follows the the beginning of Leach's criminal career, starting as a football hooligan with the Inter City Firm (West Ham FC... Green Street anyone?) to Carlton running his own firm in the 80's as protection and enforcement, and the early 90's events leading to the infamous Rettendon Murders in 1995, the victims being some of Leach's associates. There is some real gangster history in this, and t does make Green Street Hooligans and others such as Goodfellas look kinda tame when it comes to violence. Its good ole fashioned english brutality at its best, from bats and bricks and guns and fists. You would probably need subtitles if you have trouble deciphering the Brit speak. And of course, get ready to meet some of the most colorful, as well as craziest thugs ever seen in the movies. Which happened to be based on real people. I still couldnt believe how the characters [protrayed in this flick represented real people... the movie was based on Carlton Leach's bio. Its got some real graphic scenes... especially when the guns go off on the Rettendon murder scenes. O__O! (im serious, its brutal as - you actual see some good rendition of faces in the aftermath of meeting a 12 guage at point blank.) There is some lessons to be learned here. Carlton's narrative isstraightforward and to the point. The scenes are good and explicit though, and of course, since based on true events, its got some actual news clips and such in the movie. Anyways, if you love the gangster, the blood, the guts and the swearing and the sex, yeah you in for a good night.

Rise of the Footsoldier Quotes