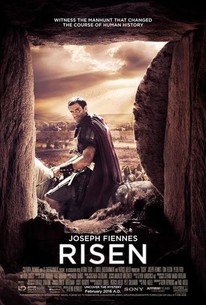 Critics Consensus: Risen benefits from a lighter tone than many faith-based productions, as well as a unique take on the Greatest Story Ever Told and a terrific turn from star Joseph Fiennes.

Critics Consensus: Risen benefits from a lighter tone than many faith-based productions, as well as a unique take on the Greatest Story Ever Told and a terrific turn from star Joseph Fiennes.

Critic Consensus: Risen benefits from a lighter tone than many faith-based productions, as well as a unique take on the Greatest Story Ever Told and a terrific turn from star Joseph Fiennes.

The first forty days after the Resurrection of Jesus Christ is told through the eyes of an agnostic Roman Centurion charged by Pontius Pilate to investigate rumors of a risen Jewish Messiah and locate the missing deceased body of Jesus of Nazareth in order to subdue an imminent uprising in Jerusalem. During Centurion's mission, his doubts of such a supernatural occurrence peel away as he encounters the Apostles and other historic biblical characters and bears witness to the legendary storied events that followed the Resurrection. A great mystery unfolds during Centurion's quest to find the body and he is deeply affected by his first-person investigation, as his previous beliefs on the matter are forever altered based on what he's now witnessed.

Antonio Gil
as Joseph Of Arimathea

Alberto Ayala
as James The Just

Joe Manjon
as Simon The Canaanite

On DVD This Week: The Finest Hours, Zoolander 2, and More
Risen Is A So-So Faith-Based Mystery

Risen is certainly a step up for this genre, and it's more open-minded than you would expect. But this is still a movie made for a captured Christian audience, and it will be those viewers who will like it best.

With so many horrible faith-based features littering the multiplex ranging from the ho-hum (Heaven Is for Real), to the inept (God's Not Dead) to the perfectly dreadful (War Room), it's nice to have one that treats its audience with respect.

Risen isn't a film that will convert nonbelievers, but it's more ambitious than the standard faith-based genre fare.

It's solidly middling fare, soft of heart and script, and given to moments of foolishly miraculous folly.

Risen is a sort of Sunday school special, an Easter adventure starring Joseph Fiennes as Clavius, a war-hardened Roman tribune who ends up investigating the disappearance of Jesus after the stone is mysteriously rolled away from the Messiah's tomb.

The problem here is that there is no zest at all to the storytelling.

Exceptionally crafted and performed, Risen is a Bible drama for a new era.

It's about faith and the strength of belief, but is flawed by inconsistent dialogue style - it ranges from sword-and-sandal formality to modern day vernacular - and the limitations of a low budget that prevents any truly miraculous visions.

An almost straightforward account made better by a strong ensemble cast.

But even if it is the best film of its type, it's not broadly appealing, and the non-religious moviegoer is likely to find it as bland as I did.

Risen is a pretty riveting film from director Kevin Reynolds. No hammy acting or dogmatic bluntness, thanks to Fiennes' layered performance as a conflicted man. I highly recommend for believers and non-believers alike.

Risen is a powerful biblical film that takes a unique look at the Resurrection story. After putting down the latest Jewish rebellion, Roman Tribune Clavius is charged with overseeing the crucifixion of the self-proclaimed Messiah Yeshua; but things take an unexpected turn when Yeshua's body disappears from his tomb, forcing Clavius to lead an intensive search to find it in order to prevent his follows from proclaiming a miracle and inciting another rebellion that would bring down the wrath of Caesar. Starring Joseph Fiennes, Tom Felton, Peter Firth, and Cliff Curtis, the film has a strong cast that delivers some impressive performances. And, the production values are especially good; particularly the score, which is quite evocative and full of sweeping themes. Inspirational and compelling, Risen is a visionary film with a fresh new perspective on the death and resurrection of Christ.

"Risen" fails to rise to the top, but it's still a decent film for a relatively low-budget period piece. Fiennes' performance is somewhat disappointing but acting is adequate. Costumes are decent, and the locations/sets are good. Moments of good cinematography but underwhelming overall. As a full-fledged Hollywood film, "Risen" might barely merit three stars, but for what it is -- a lower-budget film from a genre mired in tripe -- "Risen" stands above the rest without quite being a savior.

The usual story (doesn't everyone) know it already?) told from the point of view of a staunch unbeliever, Pontius Pilate's chief enforcer. It's better by yards over the usual drivel spilled out by these preaching-to-the-choir type of knuckleheads but I miss the passion Mel Gibson brought to this type of material. No nuance, no subtlety, no panache, no fun. And its in the writing that the fault lies. We get to watch several familiar (through telling) events and have several "I get it, but he doesn't" moments, but at no point is any attempt made to go beyond preaching, to stretch. Oy. Ultimately disappointing.

Risen gave a fresh but solemn view of the biblical story of the aftermath of Jesus's crucifixion as it tells the story through the eyes of a conflicted and emotionally drained Roman soldier named Clavius. Clavius seems more of a tired observer with his deep stare and mellow manner, and he seems appalled by the violence that the Roman soldiers perform, violence that he himself is called on to perform as well. He is tired of it all and wants to retire to a quiet life with a family and without witnessing any more deaths. None-the-less, duty demands that he kill from time to time, which he dutifully does, and he seems half mortified over this, and half compliant. During the battle in the beginning of the movie, Clavius apathetically kills a Jewish rebel, and later, during the tri-crucifixion scene, he breaks a prisoner's leg as he's dying on the cross, then runs his spear through Jesus's ribs, and he's no more bothered by this than if someone fender-bendered him at the supermarket. The way Fiennes played his role was intriguing, capturing civilians to question them about the whereabouts of Jesus's body, then dismissing them at will. The viewer expected this Roman soldier to perhaps resort to violence or torture to get his captures to speak and reveal where Jesus's body is, knowledge that he desperately needed to satisfy his commander, Pontius Pilate, but he never quite went that far, either out of compassion or exhaustion. While Fiennes was cast well, Curtis, who plays Jesus, is a cross between a hippie in California and a happy skateboard dude in a Coke commercial. In his final good-bye scene, Jesus glibly calls across the sand yelling his farewell as if mom was telling her kids to be good while dad's in charge. Clavius's young side kick Lucius is played by Tom Felton, and unlike Draco, Lucius follows Clavius around looking confused. Bartholomew was my favorite character. Clavius demands that Bartholomew tell him where Jesus's body is, and Bartholomew grins flippantly and conveys that he ain't telling nothin'! Clavius kicks him, interrogates him more harshly, and Bartholomew slowly approaches Clavius, bends down to his ear, and says, "he's everywhere!". Then he beams and prances away; the joke's on Clavius! The only funnier scene was when Clavius asked a group of men, "Does any of you know Mary Magdalene?" and most all of them raised their hands. That, and when Clavius's cut moved from the side of his lip to the center of his lip in one scene. Also, Mary Magdalene looked like Miss Karate Woman beats Godzilla when she kicked an advancing soldier out of her way and escaped out of a stone window. Mary is cast well, but her role is too brief, as is all the twelve disciples who are never given any individual definition (except for Simon). Pontius Pilate is old and whiney and is fixated on upsetting public opinion. Maybe he was really like that, but they don't show the inner turmoil he must have felt being forced to kill an innocent man to placate the masses. We all know the ending, but Risen takes an unorthodox (if you will) direction. We see facial expressions of shock and realization that tell the story better than computer-generated special effects, and we are constantly grounded with the frequent buzzing of flies over rotting bodies, hair filled with dust and sand, broken god statues, and earthquakes that crack massive stone gates. Thus, Risen shows instead of tells, and doesn't preach, thank God.