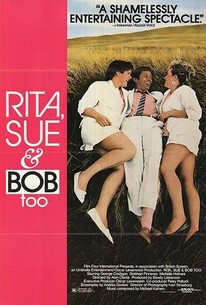 Rita, Sue and Bob Too Photos

Bob (George Costigan) and his wife Michelle (Lesley Sharp) hire Sue (Michelle Holmes) and Rita (Siobhan Finneran) to baby-sit in this sex comedy. Bob is distracted by the two plump teens while giving them a ride home, and Rita and Sue take turns having sex with Bob in the car, later comparing his manhood to "a frozen sausage." Bob feels like a big man and continues seeing the two tarts. Michelle leaves Bob when she hears about him dancing scandalously with the two teens at a steamy nightclub. Rita moves in with Bob, while Sue enters into an unsatisfying relationship with Aslam (Ghir Kulvindar). The two women realize they were happy to share Bob and make plans to continue the menage a trois.

Laura Devon
as Neighbour on Balconey
View All

Critic Reviews for Rita, Sue and Bob Too

Rita, Sue and Bob Too feels both fresh and new, and it's significant in the genesis of the new British cinema. [Full Review in Spanish]

The film asks us to like [Rita and Sue] and pity them, to find them funny and to find their lives funny, but in fact the girls appear desperate and pathetic

The piece's social jabs are so unassuming that it's easy to simply accept this as a ribald comedy with dark undertones. But the criticism can indeed be located (and endorsed).

The snap, crackle, and pop of Andrea Dunbar's screenplay reveals that sex rarely solves the problems people hope it will.

Audience Reviews for Rita, Sue and Bob Too

I doubt this film will every make anyones top film list, but it's funny all the same. Funny in a nostalgic look at Britain in the 80's. Who will ever forget Slade's 'Having a gang bang' song when you've watched this film?

Rita, Sue and Bob Too Quotes