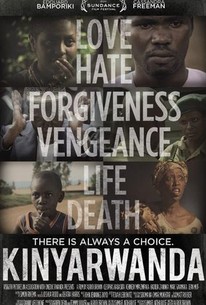 At the time of the 1994 Rwandan genocide, the Mufti of Rwanda, the most respected Muslim leader in the country, issued a fatwa forbidding Muslims from participating in the killing of the Tutsi. As the country became a slaughterhouse, mosques became places of refuge where Muslims and Christians, Hutus and Tutsis came together to protect each other. KINYARWANDA is based on true accounts from survivors who took refuge at the Grand Mosque of Kigali and the madrassa of Nyanza. It recounts how the Imams opened the doors of the mosques to give refuge to the Tutsi and those Hutu who refused to participate in the killing.

It adds texture to the central facts: This happened, and this matters.

While hardly an all-inclusive look at this complex conflict, paints a heartfelt, fairly restrained picture of a nation under siege.

The end result is a film that's un- deniably moving in its depiction of life under siege, in which horrific violence coexists with everyday emotions.

Kinyarwanda offers glimpses into the lives of Rwandans, young and old, religious and radicalized, in the wake of nightmarish carnage.

Each vignette adds to the mosaic. Characters from one turn up in another. Gradually a powerful outcome is arrived at.

Cast with both professional and novice actors (which results in uneven performances), the beautifully shot film is filled with exquisite moments...

The film does an extraordinary job of showing the roots, not Rwanda related but Belgian, that allowed this genocide to manifest.

Kinyarwanda doesn't explain how such evil came to pass. No one can. But it does a beautiful job of showing some of its ugly effects.

I've been to Rwanda. I have a strong perspective on the genocide.

As the varied characters organically intersect and intertwine, both the diversity of perspectives and shared oneness of this horrible experience are clearly seen and intimately felt.

All respect to Alrick Brown for giving audiences a fresh take on the Rwandan genocide. In a movie that was shot in 16 days, viewers will be educated and moved.

You can't hate a movie like "Kinyarwanda" that is so well-meaning and hopeful about the future of Rwanda. However, I really can't like a movie like this, either, that does not credibly reflect the complicated reality on the ground, instead just wishing that there will be a 'unified peace,' as one character puts it, and it will magically happen. And while I do want to believe in the best of humanity, it is hard to believe in it happening so often during one of the planet's worst moments. Just as there are brutal killings depicted here, even more often are there warm scenes of people doing the right thing, including one huge bluff to save a group of people about to be killed. And then there is the decision to go for a complicated structure of interrelated stories which is hard enough to pull off under optimal circumstances which this is not, with the best sequence being the Reeducation Camp. The best option would have been to tell a story of the Rwandan genocide through the point of view of one character, like say Jeanne(Hadidja Zaninka), whose parents are killed.