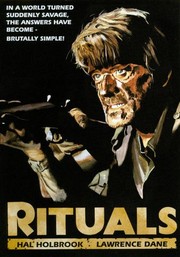 Scooter T
½ March 22, 2017
A Canadian Deliverance clone with a few twists. Worth a Watch

James C
½ June 29, 2016
Basically a copycat of "Deliverance" this stars Hal Halbrook as one of 5 doctor friends who go on a weekend trip with each other only to have things turn tragic. They quickly find out they are being hunted by someone while dealing with their personal demons and past before the film comes to its climatic conclusion. Considered a underrated film i didnt find it near as great as some of the reviews made it out to be so my recommendation is stick with "Deliverence".

John M
½ June 13, 2016
Scary ads promoting Rituals as "Gothic Horror' are certainly misleading. This Canadian thriller oddity featuring a good performance by Hal Holbrook begins as a Deliverance copy but ends up somewhere quite different. A kind of violent treatise on medical ethics, Rituals uses the unseen stalker premise to flesh out the relationship between five doctors who go on a camping trip only to have it horribly derailed by someone from their past. Suffering mainly from a bad film transfer, poor lighting in parts, and a slightly murky ending, Rituals isn't so much a cautionary tale like Deliverance, but a fairly well crafted story of survival and revenge.

Michael W
½ June 9, 2015
Tense wilderness drama seemingly inspired by DELIVERANCE. Five Doctors head into the wilderness for a getaway and are mercilessly stalked by an unknown party. Not only do the Doctors not really appear to enjoy the wilderness, they also do not seem to enjoy each other's company either and their teamwork disintegrates almost immediately upon the first moment of trouble. Good Canadian thriller.

Grayson W
½ January 4, 2015
I really liked Rituals. Although it is similar to Deliverance in its setting and visuals, I felt the story was so different that it would be unfair to write it off as a cheap knockoff. Although it's not as polished as its famous predecessor, I found it grittier and more suspenseful.

Shawn W
December 27, 2013
I liked this Canadian film better the second time around and had to up my rating. An outdoorsman out for revenge for being the victim of some shoddy medical work in WWII stalks a group of doctors on a hiking trip in the remote woods. The doctors are supposedly old friends but they don't seem to get along all that well (even before the killer arrives). Would have garnered a higher score had the last half hour or so not been filmed in near complete darkness.

Michael A
June 7, 2013
Not bad..not great but not bad either..reminded me a lot of Southern Comfort

Richard D
December 13, 2012
The best Canadian horror film that almost no one has heard of. It's clearly modeled on "Deliverance", and while it's not anywhere as good as that film, it goes into it's own territory after borrowing the basic premise. It's a gripping film with good performances all around and some great make-up effects. If you can find the Code Red DVD, it's extremely preferable to the PD copies circulating under the title "The Creeper".

Michael J
½ June 3, 2012
There are way too many great things to say about this movie that I can't even fathom exactly where to begin and keep this review succinct! I was absolutely overtaken by this movie; put in a trance in which only this movie existed for about 90 min. And i believe that if you are able to give yourself to this movie, to buy into it and truly empathize with its characters . . . then this movie will kick the crap out of you! UNFORGIVING, brutal, suspenseful, depressing, and masterful! The ONLY reason I could think to give this movie 4 1/2 stars instead of 5 is because I don't think that it is a movie that I will end up watching over-an-over again throughout my life; but it will certainly be watched again and recommended again and again and again!

Lisa J
March 18, 2012
It really dragged on. The picture was so unclear, it was hard to tell what was going on sometimes.

Bill B
½ January 4, 2012
When the internet recently started going nuts about this Hicksploitation film I was very surprised to find that I owned a public domain version on one of those giant Mill Creek sets, so I was able to give it a peep, even if it might be missing a minute or so of the full running time.

The story of five doctors who take a camping trip each year, but this year they find themselves pursued by an unseen madman who leaves clues at the scene of each attack, slowly filling in why he's so hellbent on killing them.

Decent little watch, I would be curious to see how much I like it if I get to check out a better print.

Jed D
½ August 24, 2011
This is a cult classic??? At almost every turn of the film, the action sequences and acting were overly hyped and over acted. I understood what Peter Carter, was trying to do but "Zzzzzzzzzzzz". I prefer "Deliverance."

James L
½ June 17, 2011
Great Canadian Deliverence rip-off.Perfect movie for watching up at the cottage on a cold fall night.

Michael Y
May 16, 2011
A Canadian classic and a personal favourite horror movie of mine, Rituals has that special creepy quality you just don't get anymore that comes from great acting and using the elements of nature as great cinematography.

5 doctors go on a camping trip together for a vacation away from it all. But their plans isn't the plans of someone else. Or something else. Torturing and horrifying events plague the doctors who look for help through the woods, but find themselves only doing exactly what they're expected to do. Rituals is kind of like Deliverance, but without anyone squealing like a pig. (if you get my drift) But this incredibly freaky horror movie keeps you wondering what is trying to kill them, eventually unfolding a puzzle that needs some thinking, but is pretty smart and very intriguing. You don't really see any goss slasher violence, you see the aftermath of violence. Rituals isn't just a horror but a psychological thriller that tests survival and morality, and that is shown to the fullest because of some incredible small time but talented actors. The star, Hal Holbrook, plays a very interesting, hard as nails character with a stubborn and prideful moral code. All the actors are great and play off eachother and their situations nicely, and talk about moral decisions that makes Rituals smarter than your average horror movie.

The best thing about good Canadian horror movies is that they use what's best about Canada as their key element. Like how Black Christmas was filmed during winter, Rituals was filmed in the great outdoors in the woods of Ontario. And don't get me wrong, this is an inexpensive movie, so what you see is mostly what you get. The actors go through everything! The dark woods, raging rivers, burnt out and rocky areas all WITHOUT SHOES! But this movie was still beautifully filmed. Great cinematography through the whole enviroment, capturing many, MANY hard scenes with in very good angles. I spacifically like the scenes shot on the river and crossing the burnt out forest. The score is a little too retro, sometimes working, sometimes awkward, but when it fits it really makes the scene good. You won't find any of the horror cliches here. Rituals is a rare horror that relies on its unpredictable and horrifying scenes that gets you under your skin by its excellent directing.

Rituals is a small Canadian jewel. It's not a big movie with star studded cast. It doesn't rely on blood splattering gore or sexy scenes to keep you interested. Rituals is the best kind of horror that gets in your head to frighten you. And this movie doesn't loose its steam. This horror movie has true quality because it only gets better and more interesting the more you watch it.

James O
April 29, 2011
I'm going to admit it right here and now: I did not like Deliverance that much. I think this was the reason I went into Rituals expecting nothing much. Actually, this movie is FREAKING AMAZING! The body count is higher than Deliverance, and I can live without seeing Ned Beatty r*ped by a hillbilly. Plus, this one's got Hal Holbrook! There are some really epic scenes of suspense, and a shocking head-on-a-stick scene. Now, I'm not really sure if if the killer in this is dead or not. (SPOILER) In the end, Hal's friend is burned alive by the maniac, as Hal grabs a double-barrel and fires at a strange figure. The figure turns out to be horribly burnt, and collapses on the floor, dead. Now, was this our mysterious killer, or was it Hal's friend? I think it's the killer, if you ask me. (SPOILER OVER) Overall, I highly encourage you to watch this film. I think it was recently released to DVD (and not part of the Drive-In Movie Classics Set), so it's highly recommended.
Page 1 of 3