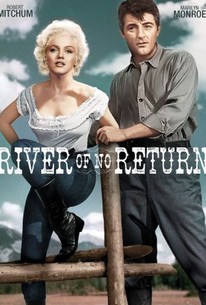 River of No Return Photos

Director Otto Preminger's only western, River of No Return is set in Canada during the 19th century Gold Rush. Farmer Matt Calder (Robert Mitchum) is released from prison after serving a sentence for shooting a man in the back to protect a friend. He arrives in a small town to retrieve his young son, Mark (Tommy Rettig), who has befriended a sultry saloon singer, Kay (Marilyn Monroe). Matt is also friendly with Kay, and thanks her profusely for looking after Mark, but distrusts her paramour, Harry Weston (Rory Calhoun)- a gambler with the morals of an alley cat. Matt and Mark return to their rural homestead, but soon glimpse Kay and Harry on a sinking raft, apparently en route to make good on a gold claim; Matt rescues the two of them, but doesn't count on Harry doing an about face, beating him up, and stealing his horse and gun; Kay stays behind to look after Matt. Meanwhile, the Indians go on the warpath, and the defenseless trio decides to seek refuge by fleeing the farm and sailing down the river on a raft. En route, the son - thanks to Kay's doing - is unexpectedly disillusioned about the father's original crime. Moreover, as Matt approaches town, he begins to plot a decisive revenge against Harry. ~ Hal Erickson, Rovi

Ed Hinton
as A Gambler

Will Wright
as Merchant

Arthur Shields
as The Minister

John Doucette
as Spectator in the Black Nugget

Mitchell Kowal
as (uncredited)
View All

Critic Reviews for River of No Return

The striking beauties of the Canadian Rockies co-star with the blonde charms of Marilyn Monroe and the masculine muscles of Robert Mitchum in River of No Return.

Some decent performances, but with this story they didn't have much of a chance.

One of the first films to discover the potential of CinemaScope and a fine example of Preminger's rational approach to the mysteries of personal morality.

There really is no return.

Director Otto Preminger has thrown all the grandeur and menace of these features upon the eye-filling CinemaScope screen.

It's fun watching Mitchum and Monroe heat things up in the Old West; Monroe is at her most luminous as a saloon singer with a heart of gold.

Marilyn Monroe here meets the West for the first, and, I am sure, the last time.

Though nicely shot in CinemaScope, this Western is not one of director Otto Preminger's or stars Robert Mitchum's and Marilyn Monroe's strong films.

It's an awfully creaky story but the superb performances and Preminger's amazing use of widescreen make it a must-see.

Despite some pretty locations and occasional tension, there's little going on.

Audience Reviews for River of No Return

Its not the greatest adventure Western ever made, or does even much of it make sense, but there's few that have as much charisma as Mitchum and Marilyn all wet on a raft in CinemaScope. First off, Marilyn gets to vamp a coupla tunes for the boys in the backroom, and then its out into the great wide Canadian open. Its fun.

A western. A Marilyn Monroe flick. Of course I had to see this. And it was just as bad as I was expecting. Now I usually don't demerit a film for bad "special effects" but this was a little absurd. I mean, was I ever supposed to believe Marilyn was on that raft? I don't see how. Awful. And when the Native American comes on the raft only to rip Marilyn's shirt as she screams helplessly. OMFG. Let's get real here people.

marilyn didn't want to make this which explains her sometime stiff performance but when she sings she's luminous and her interaction with robert mitchum and tommy rettig is good. the cinematography is beautiful, make sure to watch it in widescreen.

River of No Return Quotes