A River Runs Through It1992 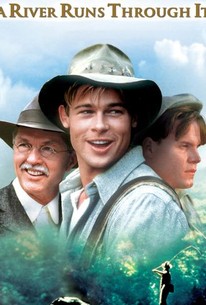 Critics Consensus: Tasteful to a fault, this period drama combines a talented cast (including a young Brad Pitt) with some stately, beautifully filmed work from director Robert Redford.

Critics Consensus: Tasteful to a fault, this period drama combines a talented cast (including a young Brad Pitt) with some stately, beautifully filmed work from director Robert Redford.

Critic Consensus: Tasteful to a fault, this period drama combines a talented cast (including a young Brad Pitt) with some stately, beautifully filmed work from director Robert Redford.

A River Runs Through It Videos

A River Runs Through It Photos

Robert Redford's lyrical direction sets the tone for this evocative adaptation of author Norman MacLean's memoir of his idyllic Montana youth. The MacLean family is presided over by the strict but encouraging Rev. MacLean (Tom Skerritt) and his loving wife (Brenda Blethyn). Craig Sheffer stars as the young Norman, the older son in his family, who takes his school work and writing a bit too seriously for Paul (Brad Pitt), the impetuous younger son, to take much stock in. Paul would rather have a good time, drink and play cards than get involved with academic study. Where Norman wants to be a college literature professor, Paul would prefer to stay in Montana all his life and wrangle some kind of job writing for a local newspaper. But, ironically, Paul is the better fly fisherman and in this way attains a sense of perfection. The film also details the MacLean boys' involvement with a colorful group of town's people -- including a young Indian woman Paul decides to date and the defiant Jessie (Emily Lloyd), whom Norman later marries.

Chuck Adamson
as Harry the Editor

Martina Kreidl
as Secretary at Newspaper

Philip A. Braun
as Dealer at Lolo

Tracy Mayfield
as Bouncer at Lolo

Anne Merrem
as Hooker at Lolo

Chuck Tweed
as Drunk in Jail

Lincoln Quesenberry
as Drunk in Alley

Hawk Forssell
as Bouncer at Speakeasy

Kathy Scharler
as Waitress at Speakeasy

News & Interviews for A River Runs Through It

View All A River Runs Through It News

Critic Reviews for A River Runs Through It

Redford directs with a fluid grace... to capture the idyllic, light-drenched aura of Maclean's early childhood memories. Even the seemingly unexciting fly-fishing sequences take on a magical air worthy of Spielberg.

Redford remains a fine director of actors. With Brad Pitt, who gives a particularly good performance, he is dealing moreover with an actor whose handsomeness is reminiscent of his own at that age.

Redford does an honorable job emulating the author's unsentimental, laconically witty style. A River Runs Through It is made with reverence and taste, but it only fitfully comes fully alive as a film.

A skilled, careful adaptation of a much-admired story.

This may work for you if you settle at the outset for a nostalgic, all-American mood piece.

The film is blighted by an inability to break free from its source.

Sherritt has been in a lot of movies, but the role of Rev. Maclean seems like one he was born to play. He owns it, the way that Pitt and Sheffer own theirs, and as a result it takes no time at all to believe this group as a family and become involved.

There is too much taste, discretion and detachment in Redford's rendition of MacLean's sprawling family saga, but the scenery and Brad Pitt are nice to look at due to Philippe Rousselot's gorgeous Oscar-winning cinematography.

Although heart-throb Pitt steals the film to some extent, veteran actor Skerritt scores highly with his outstanding and heartfelt portrait of the watchful father.

Even set against the Sierra Club beauty of Redford's Montana, it's hard to get excited by fisherman casting their lines into the water.

Audience Reviews for A River Runs Through It

This movie is about the youth and young adulthood of two brothers - set in the mountains of Montana - with fly fishing as a major component. Robert Redford is the narrator (and director). Worth watching.

Absolutely breathtaking cinematography more than makes up for a less-than riveting storyline. A young Brad Pitt shines as well.

Robert Redford directs and narrates this American poem about the life of one family in early 20th century Montana. Touching and evocative, surely this is one of Redford's better films, a bittersweet toast to life itself. The casting choice of C.Sheffer, in my opinion, is where this work unfortunately falters. He seems to be wondering through the length of the film: "what am I doing in this here movie with Brad Pitt?!?"

I can't see whats not to like about this film. Sure, we've seen it a million times but "A River Runs Through It" works like no other. The beatiful direction and visual of Montana in the early 1900's is done wonderfully. The acting, in my own opinon, was very well-done. Once again I am surprised to say that another movie starring Brad Pitt has entered the list of my favorite films. I've never really noticed it before, but about 75 percent of my favorite movies star Pitt. But, does that make him my favorite actor? I'm quite unsure. I mean, "Fight Club" is my third most favorite film out there. "Se7en", I believe is number six. "Sleepers" is at number ten [altough I may push it up to the late teens]. "The Assassination of Jesse James by the Coward Robert Ford" is up there and "The Curious Case of Benjamin Button" and "Burn After Reading" are in there too. I believe theres more that aren't coming to mind. Brad Pitt is just one fine actor. I've never noticed before how many of his movies were favorites of mine. Well, in this movie he plays Paul, the younger brother of Norman. Paul is the younger brother of Norman. Paul is the brother who likes to live life like no tommorow. He the type of character who isn't afraid to die. Hes a character who just doesn't give a fuck what people think. There is one scene in this movie where Paul brings an Asian girl into a bar [where she is not allowed----takes place during WW1]. Paul is the cool character. Brad Pitt does one great job in the supporting role. The movie pretty much just tells the tale of two close brothers whose lives change over the course of time. The movie has beatiful shots of rivers as the characters in the movie fly-fish. To me, I loved this movie. Some find it boring, but me, no. I found this to be a beatifully told tale of the true story of the two Maclean brothers. Great acting, great direction, great visual photography. Thats enough for me to give this movie a solid five stars.

A River Runs Through It Quotes