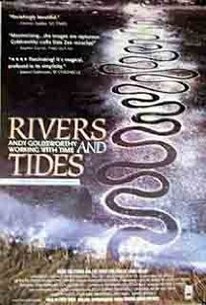 Critics Consensus: Andy Goldsworthy and his art are beautifully captured in this engaging documentary.

Critics Consensus: Andy Goldsworthy and his art are beautifully captured in this engaging documentary.

Critic Consensus: Andy Goldsworthy and his art are beautifully captured in this engaging documentary.

Documentarian Thomas Riedelsheimer shows us Andy Goldsworthy as he creates art in natural settings using natural materials such as driftwood, ice, mud, leaves, and stones. Goldsworthy comments on his "earthworks" and occasionally responds to offscreen questions from Riedelsheimer while he painstakingly builds his outdoors sculptures. With some exceptions, such as a winding stone wall that he built in Mountainville, NY, Goldsworthy's creations are intentionally mutable works. We see how several of them fall apart, melt, or drift away due to exposure to the elements; we also see, for example, a complex structure of interconnected sticks collapse while Goldsworthy is still working on it. Riedelsheimer takes us to Goldsworthy's home in Penport, Scotland, and to a French museum, but the emphasis of the film is on observing Goldsworthy at work. ~ Todd Kristel, Rovi

An absorbing portrait of a unique artist's professional and personal communion with nature.

Most of Goldsworthy's work is impermanent, but Rivers and Tides captures, permanently, both the art and the artist, showing us a creative, productive life in the process of being well-lived.

[Goldsworthy's] art is meant to be evanescent, like the nature he reveres. We are privileged to see it documented by the filmmaker's camera.

Mr. Goldsworthy's work is meant to be photographed -- 'photography is the way that I talk about my sculptures,' he says -- and Mr. Riedelsheimer rises to the occasion.

Andy Goldworthy's work deserves to be profiled in this breathtaking, beautiful, and fascinating look in to nature, the creative process, and of an unassuming artist...

If the film lets Goldsworthy overexplain what's happening, it also affords ample to time to languidly take in the imagery and let its beauty and simplicity speak for itself.

His work reminds us of an artist's true focus: a meditative commitment to discovery, creativity, and the enhancement of God's own invention.

Rivers and Tides: Andy Goldsworthy Working with Time is an extraordinarily spiritually literate documentary about one of the world's greatest nature artists.

A wondrous look at an artist and his work with lots of joyous surprises.

[font=Century Gothic][color=sienna]"Rivers and Tides" is an interesting, low-key documentary about Andy Goldsworthy, a Scottish sculptor who works in nature while using material that he finds. The documentary captures his working at home in rural Scotland and abroad in Nova Scotia, New York and France. Goldsworthy is not sure what his sculptures will turn out due to the very unpredictability of what he is working with. Some of them are designed to be carried away by the rivers and tides. Thus, he illustrates how nature is ephemeral. It's very different seeing artwork that is not permanent and hanging in a museum.(I was thinking about the temporary paintings that were created only for "The Mystery of Picasso.") Goldsworthy captures these temporary sculptures by photographing them. [/color][/font]

Another documentary about a kooky artist. This one manufactures art of nature and watches as nature washes it away. It's kind of like those little stick forts that you made as a kid that washed away eventually down the drain. This guy never stopped making those forts.