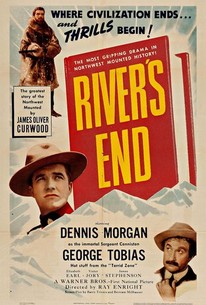 Previously filmed in 1920 and 1931, James Oliver Curwood's River's End was given a third go-round by Warner Bros. in 1940. Dennis Morgan plays a dual role as falsely accused murderer John Keith and stalwart Canadian mountie Sgt. Conniston. When Conniston is accidently killed, Keith takes his place, and while in Redcoat guise manages to solve the murder for which he was accused. George Tobias dominates the proceedings as French-Canadian Andy Dijon, who spends most of his time trying to get into trouble to get out of an unwanted marriage. The heroine is Elizabeth Earl, of whom little was heard after River's End ran its course; the same could not be said of supporting player James Stephenson, who would skyrocket to stardom in 1940 by virtue of his performance in William Wyler's The Letter.

There are no critic reviews yet for River's End. Keep checking Rotten Tomatoes for updates!

There are no featured reviews for River's End at this time.