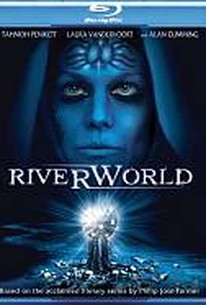 Killed along with his fiancé Jessie (Laura Vandervoort) in a nightclub suicide bombing, American journalist Matt Ellman (Tahmoh Penikett) washes ashore in new world populated by everyone who has ever died on Earth in this fantasy miniseries adapted from the books by author Philip Jose Farmer. Now, in this strange new land, Matt's only goal is to find the woman he loves, and spend eternity with her. Along the way, the befuddled wanderer climbs aboard a riverboat piloted by celebrated American author Mark Twain (Mark Deklin), and joins forces with a fierce female warrior named Tomoe (Jeananne Goossen), who hails from the 13th Century. The further the group travels up the massive river they emerged from, the more apparent it becomes that an extraterrestrial entity is tracking their every move.

While the film has a somewhat cinematic look at times with the background and grander special effects, Riverworld still feels like a TV movie.

This is practically flavorless and ultimately without any distinctive identity, just another SyFy original movie with better production values

I have never read the books this is based on but perhaps I should. This particular movie adaption isnt great but its not horrible. It has some decent acting but overall its just another Syfy movie.