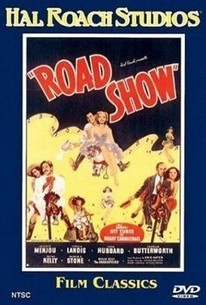 When millionaire bachelor John Hubbard takes a run-out powder at his own wedding, Hubbard's vengeful fiancee Polly Ann Young has the luckless fellow committed to an insane asylum. Hubbard escapes with certified looney Adolphe Menjou; together they join a carnival run by Carole Landis. Hubbard and Menjou not only save Landis from bankruptcy, but also convince Hubbard's allegedly normal uncle Charles Butterworth (who races fire engines as a hobby) to arrange for the carnival to be set up right next to the family mansion. Directors Hal Roach, Hal Roach Jr. and Gordon M. Douglas deliberately blur the thin line between sanity and insanity throughout Road Show. Just who's crazier: the delusional Menjou, who takes photographs with an invisible camera, or lovestruck Indian George E. Stone, who spends his free time chasing after carnival employee Patsy Kelly? And are the freewheeling carney folk any goofier than the flibbertigibbet society folk? The Charioteers, a black singing group who'd previously appeared in the Broadway production of Hellzapoppin, act as a sort of Greek chorus, commenting on the action with several refrains of the Hoagy Carmichael song "Calliope Jane". The amiable wackiness of Road Show is capped by a car-chase finale. The film was based on a novel by Eric Hatch, who four years earlier had worked on Roach's Topper. Watch for several familiar comedy faces among the uncredited bit players, including Shemp Howard of Three Stooges fame.

Edward Jackson
as Charioteer
View All

There are no critic reviews yet for Road Show. Keep checking Rotten Tomatoes for updates!

There are no featured reviews for Road Show at this time.