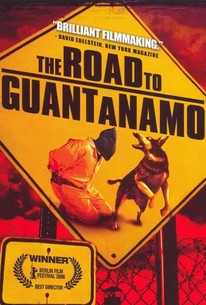 Critics Consensus: A gut-wrenching and riveting docu-drama that serves as a stinging indictment of U.S. military justice in an era of ever-increasing scrutiny.

Critics Consensus: A gut-wrenching and riveting docu-drama that serves as a stinging indictment of U.S. military justice in an era of ever-increasing scrutiny.

Critic Consensus: A gut-wrenching and riveting docu-drama that serves as a stinging indictment of U.S. military justice in an era of ever-increasing scrutiny.

The Road To Guantanamo Photos

Michael Winterbottom combines fact and fiction in "The Road to Guantanamo" recounting the story of the Muslim men from Britain now known as the Tipton Three. In 2001 they set off for a wedding in Pakistan, took a side trip to Afghanistan and were captured by the Northern Alliance, held at an American military camp and later shipped to Guantanamo. They remained imprisoned there for two years, until evidence emerged that they were still in Britain at the time they were accused of having been at a rally with Osama bin Laden.

Jacob Gaffney
as Kandahar Interregator No. 1

Mark Holden
as Kandahar Interrogator No. 2

Duane Henry
as Guard No. 1

William Meredith
as Guard No. 2

Payman Bina
as Guard No. 3

Nancy Crane
as Interrogator No. 1

Ewan Bailey
as Interrogator No. 2

Martin McDougall
as Interrogator No. 3

Naser Ranjha
as Interrogator No. 4

Justin Lynch
as Interrogator No. 5

Sara Stewart
as Interrogator No. 6

Demetri Goritsas
as Interrogator No. 7

James McNeil
as Interrogator No. 8

Sasha Pick
as Interrogator No. 9

Steven Beckingham
as Guantanamo Guard No. 1

Brian Flaherty
as Guantanamo Guard No. 2

Jason Schams
as Guantanamo Guard No. 3

Andre Pitts
as Guantanamo Guard No. 4

Justin Thomson
as Guantanamo Guard No. 5

Tom Whitecross
as Guantanamo Guard No. 6
View All

News & Interviews for The Road To Guantanamo

MPAA Rejects Taxi to the Dark Side Poster
RT-UK’s What to Watch at the Edinburgh Film Festival
Box Office Guru Preview: Evan Shall Lead the Way

View All The Road To Guantanamo News

Critic Reviews for The Road To Guantanamo

The Road to Guantánamo will drive you crazy, if you aren't crazy yet.

It makes its point in a way that a straight documentary could not.

While not an altogether convincing character study of the three detainees, Guantanamo is a nonetheless chilling indictment.

Offers a gripping rebuke of the way prisoners are treated at Guantanamo, even though it never entirely settles important questions about what the Tipton Three might have been up to.

Winterbottom's re-enactors do a persuasive job of depicting young men whose ad hoc decision to travel from Pakistan to Afghanistan put them solidly in the wrong-place/wrong-time category.

A very good movie that was initially made for television. [Full Review in Spanish]

Grueling as it is to watch, and it's the most protracted ninety-minute movie I've ever seen, it is packed with sly insights into Bush's "long war," hitherto known as the global war on terror.

Timely political documentary that resolves one set of issues while rsiaing others.

The director's slovenliness is a torture device of its own, but the grueling point is well taken

Director Michael Winterbottom brings us face-to-face with the national humiliation of Guantanamo prison where the Geneva Convention and legal protocol have been disposed of like the now-filthy rivers of our country.

If we ever felt like the soldiers and interrogators seen here were in any way human, Winterbottom and Whitecross' indictment of their behavior would hit twice as hard.

Audience Reviews for The Road To Guantanamo

Americans need to wake up as to what we are doing in the name of protecting ourselves from terrorist!! Are we becoming terrorist ourselves?

Brilliant retelling of what happened to three brothers that were captured on their way to a wedding and subsequently sent to Guantanamo Bay. Chilling and effective, this film is a stunning drama with documentary elements. This is a well constructed film that exposes the conditions of Guantanamo Bay. Brilliant, sad and eye opening this is a film that exposes the condition of the infamous prison. This is a disturbing film that should be seen to be believed. Brilliant and provoking, The Road to Guantanamo is one terrific documentary that makes you ask important questions. This is a disturbing film that shows the harsh realities of what happened to three detainees in Guantanamo Bay. Provoking and it does a great job at re-enacting the ordeal of the three men that were falsely imprisoned, this is a must see film for anyone looking for a haunting, thrilling and memorable documentary to watch. I really enjoyed the film and thought it was very insightful. Though this is a re inactment, I found the film to be nonetheless disturbing and quite the unique viewing experience. If you're looking for a solid documentary to watch, give this film a shot. As far as documentaries are concerned, Road to Guantanamo Bay delivers. The film has a take no prisoners' attitude that gives the real deal of what really goes on behind the walls at Guantanamo. Brilliant, provocative and shocking, this is a well crafted documentary film.

Shafiq: My name's Shafiq Rasul, and I'm from Tipton, I tell them I ain't Taliban, but they don't wanna listen. You won't believe I just came out here, for my mate's wedding, do you? I never thought my ass, would be heading for Cuba.  The Road to Guantanamo is a disturbing and very well made docudrama about three friends from England who were imprisoned in Guantanamo. The film uses interviews with the actual people, along with new footage and reenactments of the events that took place. The movie is both sad and terrifying. To think about what those three went through and also about the others who had been wrongfully imprisoned there that we don't know about. Michael Winterbottom is an amazing director. This is up there with my favorite movie from him; A Mighty Heart. The way he weaves both the actual interviews and the reenactments together is great. The cast is actually pretty good. They make the situations and characters they are reenacting believable. This isn't a movie that you want to watch, but one that you need to watch. It's an important and well-made piece of filmmaking about The Tipton Three and the injustice they received at the hands of the United States Military.

It's incredible and really brings to light what went/goes on out there. People who you would think you can trust eg. the US and UK military and embassy workers, spinning lies just to get those poor men to "admit" they're involved with terrorist cells. It's disgusting how they were treated in Guantanamo and even more disgusting how only an extremely small amount of detainees there ever go to trial and the fact that none were found guilty is just horrendous. I understand the military not believing what some of those men say but obviously a lot of them are honestly telling the truth and being coaxed into confessions.

The Road To Guantanamo Quotes