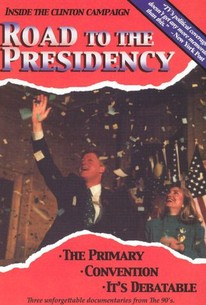 The irreverence of Michael Moore combines with the powerful insight of The War Room as three documentaries combine to take viewers on a telling stroll down Bill Clinton's path to the White House and paint a vivid portrait of politics in the 1990s. In "The Primary," Democratic candidate Clinton travels to Illinois to face off against rivals Paul Tsongas and Jerry Brown in the St. Patrick's Day Primary. A national party staged at New York's Madison Square Garden and orchestrated by politically adept college students follows in "Convention," with the final segment entitled "It's Debatable" offering a candid look at the first debate between Clinton and then-President George H. Bush.

Critic Reviews for Road to the Presidency

There are no critic reviews yet for Road to the Presidency. Keep checking Rotten Tomatoes for updates!

There are no featured reviews for Road to the Presidency at this time.

Road to the Presidency Quotes