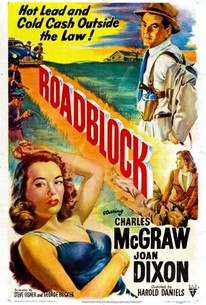 In this film noir, an insurance investigator falls in love with a golddigger who claims that she is falling for him too, but cannot be with him because he cannot afford to keep her. They decide to marry, and to get his sexy bride some money, the investigator gets involved in a conspiracy to steal over $1 million in bills slated to be destroyed. Despite his plans, he is not prepared for the killing of a postal worker, and ends up framed for the crime causing he and the girl to abandon their mountain cabin. Unfortunately, a series of roadblocks prevent their escape.

Dewey Robinson
as Mike the Bartender

A typical low-budget film noir of the early 1950s.

There are no featured reviews for Roadblock at this time.