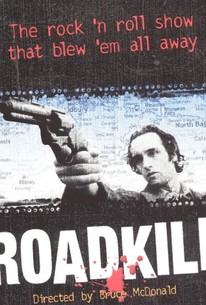 Like its title, Roadkill is a little flat and moldy at times, but generally effective. Concert promoter Valerie Buhagiar decides to look for a legendary "lost" band called The Children of Paradise, in hopes of staging a lucrative comeback tour. Buhagiar's odyssey takes her through the backroads of Canada. En route, she stumbles upon a thrill killer-and he's one of the more normal people that she meets. Director Bruce McDonald doubles as one of the film's stars.

Roadkill was the first film to flush the institutional mentality out of English-Canadian cinema and became the starting point in a continuing revelation of the Canadian self. 

a wild ride along Canadian backroads

There are no featured audience reviews yet. Click the link below to see what others say about Roadkill!