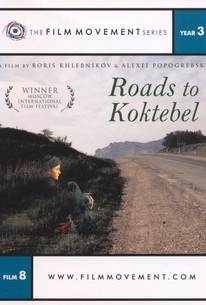 The Russian writing/directing team of Boris Khlebnikov and Alexei Popogrebsky makes their feature debut with the road movie Koktebel. Starting in Moscow, a widowed alcoholic father (Igor Chernevich) and his 11-year-old son (Gleb Puskepalis) set out on foot headed for the Crimean town of Koktebel. Along the way, they meet up with grumpy recluse Mikhael (Vladimir Kucherenko), who ends up shooting the father during a drunken brawl. Luckily, local doctor Xenia (Agrippina Steklova) fixes him up, leading to a romance. The father stays with her, while the son finishes the journey by himself. Koktebel was shown at the 2003 Karlovy Vary Film Festival.

Igor Chernevich
as The Father

Gleb Puskepalis
as The Son

Igor Csernyevics
as The Father

Anna Frolovtseva
as Tenant
View All

Critic Reviews for Roads to Koktebel

here the father and son are not so much returning home as trying to build a new one on the foundations of Russia's history, in a terra incognita where values, and even names, have changed.

A road movie that plays out as a restrained human drama, that's mysterious and keenly observant.

Audience Reviews for Roads to Koktebel

I liked it up until the end (I do NOT like cruelty to animals).