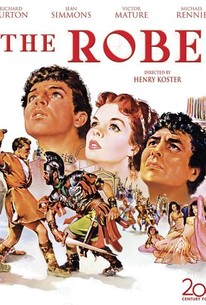 Historically important as the first CinemaScope feature film, 20th Century-Fox's The Robe is fine dramatic entertainment in its own right. Based on the best-selling novel by Lloyd C. Douglas, the film stars Richard Burton as the wastrelly Roman tribune who is assigned by a weary Pontius Pilate (Richard Boone, who spends the whole of his single scene washing his hands) to supervise the crucifixion of Christ. After the Seven Last Words, the jaded Burton wins Christ's robe in a dice game. Gradually, the mystical influence of the holy garment transforms Burton from a roistering cynic into a True Believer--at the cost of his own life, which he willingly gives up in the service of his Lord. Also starring in The Robe are Jean Simmons as Burton's pious childhood sweetheart, Victor Mature as his Christian-convert slave Demetrius (an excellent performance--in fact, Mature is more believable than Burton!), Michael Rennie as the disciple Peter, and Jay Robinson as the raving Emperor Caligula. Mature, Rennie and Robinson would appear in the 1954 sequel to The Robe, the hurriedly assembled Demetrius and the Gladiators. Watch and listen for the unbilled contributions of Michael Ansara as Judas and Cameron Mitchell as the voice of Jesus. The film won three Academy Awards, and a special Oscar bestowed upon Fox for the development of CinemaScope. For many years, the TV prints of the Robe were struck from the "flat," standard-ratio version shot simultaneously with the widescreen version. Only recently has the CinemaScope The Robe been made available to cable TV (shown in "letterbox" format to allow home viewers the full picture). ~ Hal Erickson, Rovi

A. Ben Astar
as Cleander

News & Interviews for The Robe

View All The Robe News

Critic Reviews for The Robe

The performances are consistently good.

Tthe mightiness of masses and the forms of heroes have never loomed so large as they do in this studied demonstration, projected by CinemaScope. But an unwavering force of personal drama is missed in the size and the length of the show.

Turgid direction, probably not helped by a necessarily cautious approach to framing, is married to creaky dialogue and stiff performances to render this of purely historical interest.

It is a beautiful picture, a story of faith and Christianity triumphing over tyranny. Cinemascope and magnificent technicolor plus the performance of Richard Burton, Jean Simmons and Victor Mature make a picture that will live long in the memory.

The final acts of defiance are superbly monumental; the finale more than makes up for a shaky start.

This is the age of elephantine, humorless films that show little if any artistic endeavor.

It's hard to actively hate anything as deeply earnest as The Robe, but it is a long, tough sit.

Everything, including performances, is turned up to eleven, and what it lacks in finesse it more than makes up for in sheer spectacle.

Audience Reviews for The Robe

Richard Burton lends his gravitas to this "we're talking about Christianity and so we're very serious" vehicle as tried-and-true son of Rome who falls for a Christian woman and comes to be converted himself. Slow moving and lead-footed, finally a torturously boring exercise in film watching, however sumptuous the appointments.

A stunning visual spectacle that should be remembered only for being the first CinemaScope movie ever released, since the direction is clunky, the plot overlong and terribly contrived (the character's conversion is never convincing) and the dialogue so full of highs and lows.

The often forgotten Biblical tale, The Robe is a "sequel" to the Passion and Richard Burton proves that he can easily out-Heston Heston in the story of a redeemed man.