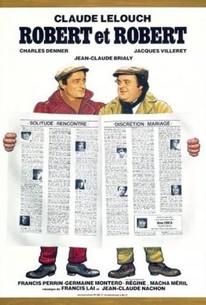 Robert #1 is played by Charles Denner, while Robert #2 is played by Jacques Villeret. Beyond their common name, the two Roberts are as different as night and day. Oh, there is one more resemblance: both Roberts are lonely, and both hope to meet suitable mates through a computer dating service. As they await the arrival of their new dates, Robert et Robert become fast friends. Of the three favorite film subjects of writer/director Claude Lelouch--romance, crime, and politics--Robert et Robert falls firmly into the first category.

Watching a Claude Lelouch film is often like sitting in a nice warm bath, sipping champagne. It's a palpably sensual experience.

Lelouch must have had the masterful comedies of Ernst Lubitsch and Sacha Guitry somewhere in the back of his fluttery mind while inventing "Robert et Robert," but he never achieves a magical light touch.

They are good company.

There are no featured reviews for Robert et Robert at this time.