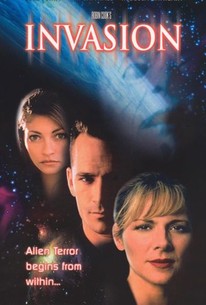 Based on a story by Robin Cook, this made-for-TV sci-fi-drama concerns a group a predatory aliens who plan an unusual invasion of the Earth. The aliens scatter the land with a shower of minerals which trigger a virus that has always existed in human beings, but has remained dormant until now. The virus causes people to mutate into a new species who remain subservient to their alien hosts, and are willing to turn control of the Earth over to their new masters. Soon most of the world has become infected, and the tiny handful of survivors most come up with a cure before it's too late. Invasion stars Luke Perry as Beau, one of the first to become infected; Rebecca Gayheart as his girlfriend Cassy; and Kim Cattrall as Dr. Miller, one of the medical researchers investigating the virus.

The ending is particularly weak and reinforces the notion that this is a horror-movie retread, with no further resonance.

Feels like a science-fiction concept from 1951 that has been strained through a soap-opera sieve and left to moulder on the counter for six weeks.

There are no featured audience reviews yet. Click the link below to see what others say about Robin Cook's 'Invasion'!