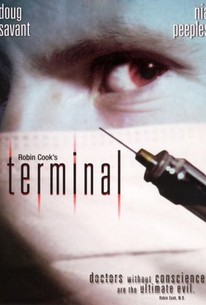 One of the acknowledged masters of the medical thriller, Robin Cook, co-scripted Terminal. Sean O'Grady (Doug Savant) is an intern who begins to wonder about a supposed miracle cancer cure his hospital is dispensing after a young girl dies from the disease. He must overcome a hostile bureaucracy as well as other doctors who are hiding dangerous secrets. This made for television film was directed by Larry Elikann and features Michael Ironside, Nia Peeples, and former Newsradio cast member Khandi Alexander.

There are no critic reviews yet for Robin Cook's 'Terminal'. Keep checking Rotten Tomatoes for updates!

There are no featured audience reviews yet. Click the link below to see what others say about Robin Cook's 'Terminal'!