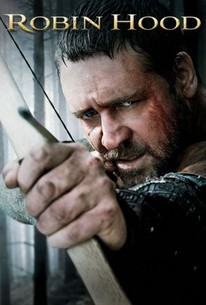 Critics Consensus: Ridley Scott's revisionist take on this oft-told tale offers some fine acting and a few gripping action sequences, but it's missing the thrill of adventure that made Robin Hood a legend in the first place.

Critics Consensus: Ridley Scott's revisionist take on this oft-told tale offers some fine acting and a few gripping action sequences, but it's missing the thrill of adventure that made Robin Hood a legend in the first place.

Critic Consensus: Ridley Scott's revisionist take on this oft-told tale offers some fine acting and a few gripping action sequences, but it's missing the thrill of adventure that made Robin Hood a legend in the first place.

Director Ridley Scott and actor Russell Crowe reunite for their fifth big-screen outing, a retelling of the Robin Hood legend featuring the Gladiator star in the titular role. A bowman in the army of Richard Coeur de Lion, virtuous rogue Robin Hood rises from an unlikely background to become a hero to the impoverished people of Nottingham and lover to the beautiful Lady Marion (Cate Blanchett). Cyrus Voris, Ethan Reiff, and Brian Helgeland collaborate on the screenplay for a costume adventure produced by Brian Grazer (Frost/Nixon, American Gangster). ~ Jason Buchanan, Rovi

Eileen Atkins
as Eleanor of Aquitaine

Matthew MacFadyen
as Sheriff of Nottingham

Scott Grimes
as Will Scarlet

Léa Seydoux
as Isabella of Angoulême

Thomas Arnold
as Captain of the Royal Barge

Hannah Barrie
as Woman at Bog

Scott decided, I think, to get away from the whole campy thing in tights business and wanted to make this 'real'. So there is sweat and dirt and rats at the cheese and even bad teeth, which is fair enough, but it is also joyless.

We never even get to see Robin steal from the rich and give to the poor. That's because the film is a prequel in search of a sequel. With any luck, we won't get one.

Its $200-million budget is on the screen. This is a big-scale ambitious period epic in the 60s grand tradition. It seeks to retell a well-worn tale, to put old wine in a shiny new bottle.

The film is pretty, and there are a few solid moments every hour. But considered as a work of cinema, with paid professionals involved, it's an extremely lackluster story.

Yes, it's dour, but it's also gritty and not nearly as silly as most "Robin Hood" adaptations.

It is a long, joyless exercise in tedium that defies imagination, this new journey to Sherwood Forest an arrow to the jugular that's as lifeless as it is disappointing.

Ridley Scott and Russell Crowe's prequel ditches all that was fun about the legend.

Borrowing heavily both visually and thematically from his earlier projects, Gladiator and Kingdom of Heaven, Scott weaves together a solid tale that emphasises Robin's moral rise and John's travails in the opposite direction.

As history is being rewritten, at least there are arrows whizzing everywhere, assaulting eyes, necks, chests, and every appendage.

Feels excessively long with violence that most assuredly maxes out its PG-13 rating.

A more realistic / historical take on the legend of Robin Hood and his merry men, albeit not successful.

[Robin Hood's] an early summer blockbuster that, unlike so many of its ilk, really hits the target.

It is an interesting idea to make it about the character's pre-outlaw story, which comes to life with a wonderful production design and great acting from the cast. Even so, the technical aspects are not enough in a movie that goes for so many questionable narrative choices.

A truly polarizing film. Writing this review a couple of months after seeing it, it feels forgettable, but I remember being entertained, and thinking that the story was well-organized with a few clever angles in the adaptation. I'm saying the same about this as I did about Body of Lies: mediocre for Ridley Scott is still better work than a lot of Hollywood garbage.

A decent enough film, with good production value. However it's no Gladiator this time out, in truth it feels more like a prequel to what led up to the tale of Robin Hood. It can't top prince of Thieves though for me.