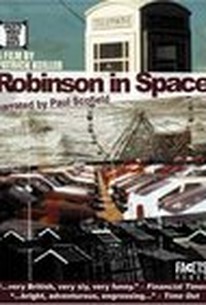 Two fictional characters, The Narrator (Paul Scofield) and Robinson, provide the wry commentary for Patrick Keiller's semi-documentary look at contemporary British society. The two have been commissioned by a British advertising company to do a thorough survey of Great Britain in order to discern its "problem," the exact nature of which is never elucidated. The two embark upon seven distinct trips across the country and find it inundated with ugly urban sprawl and nearly devoid of habitation. ~ Sandra Brennan, Rovi

Critic Reviews for Robinson in Space

It fascinates because it's so offbeat, witty and provocative.

There are no featured reviews for Robinson in Space at this time.