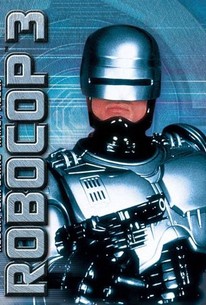 Critics Consensus: This asinine sequel should be placed under arrest.

Critics Consensus: This asinine sequel should be placed under arrest.

Critic Consensus: This asinine sequel should be placed under arrest.

In this second sequel to RoboCop, the mechanical humanoid opposes the evil designs of his creators, who have gone corrupt and are trying to take over all real estate in Detroit, kicking the poorer citizens out of their homes and turning them out into the streets.

Diane Butler
as Woman on Vidphone

Alex Van
as Rehab in War Room
View All

Watch the first episode but stop after that.

Limiting the gore, but not the carnage, in pursuit of a PG-13 rating and more youngsters, pic remains a cluttered, nasty exercise that seems principally intent on selling action figures.

In the latest episode of the series, which seems to have nearly run out of steam, he is portrayed by Robert John Burke, an actor who bears some resemblance to Mr. Weller while lacking his forerunner's tongue-in-cheek glint of authoritarian machismo.

A pretty illogical plot, uninteresting characters and so-so effects are sure to keep this one a snoozer.

If you really want more RoboCop, rent the video of the first movie.

Clearly more concerned with action and explosions than bloodthirsty violence, refraining from the second film's nastiness or the first's experiment in satirical excesses.

Worse than anything to do with the plot, is the saggy action, which has that unpleasant peek-a-boo quality of hard violence retrofitted into teen-friendly fare.

What was turning out to be a smart franchise here loses an edge it never quite recovers.

The movie seems stuck betwixt and between.

The series had run its course.

With the imminent release of the new Robocop film I thought a rewatch of the notorious trilogy bookend was in order. Directed by Fred 'The Monster Squad' Dekker and written by graphic novel icon Frank Miller how could it go wrong? Well in all fairness I don't think they did go that far wrong abeit a few obvious changes. First of all as we all know the overall violence had been watered down hugely. Of course there are some that will argue that blood n bullets don't equal a good film, and they'd be right, but in the case of this franchise I personally think you need it. Like various other classic adult franchises ('Alien', 'Predator', 'The Crow' etc...) they simply work better without restrictions on who will be watching them, free reign...because they are for adults. So straight off the bat all the dark satirical graphic novel type violence and blood has almost been taken out. I say almost because the film does have some good moments. You can tell its an old 90's film because it does still manage to squeeze in some violence and edgy bleakness. A small scene where an OCP suit leaps out of their tall skyscraper due to their stock crash. Next scene we see a 'blink and you'll miss it' shot of him hitting the ground, well you don't actually see that. Plus during some actions scenes where bad/good guys are gunned down you do get some good old fashioned bloody squib hits just like the first two films. Most don't have any squibs but they are in there so the film isn't all PG-13, pretty sure you get that these days. The actual plot isn't too bad in all honesty, its not too unfamiliar but it works for this franchise. OCP control the cops and now have this special unit specialising in clearing out this specific urban region in Detroit to make way for Delta City, yep the're STILL trying to make Delta City. Naturally OCP are trying to make out this is a positive thing for Detroit and they're actually helping people relocate, but of course in reality they are acting like Nazi's and stormtrooping everybody off in buses without a care for families, property, well being etc... The concept works but its a forced one, most of these OCP guys are dressed like Nazi SS officers with long trench coats in militaristic fashion. They round everyone up just like the Jews were in WWII, many end up getting shot but all that is covered up by news propaganda. Their leader played by Brit John Castle is a decent Euro villain who snarls perfectly. So you throw Robo into the mix and at first, like the cops, he's following OCP rules but eventually he sees how wrong it is, as do the cops, and they all change sides. Its all very predictable, there are a few predictable sequences where the drama is suppose to be heightened to rouse your emotions, like when the cops turn up to help the civvies or when Robo goes after the bad guy who kills Lewis, but the film never really manages to charge you up as it should. It tries hard to do so but just feels flat. There are some nice visual moments (Robo's intro sequence) but nothing as iconic as the first film, hell even 'Robocop 2' couldn't quite give us anything that visually iconic. I think the worst part of the film was the inclusion of the Japanese company working with OCP. This really didn't need to be in there and I don't think you would of missed it if it wasn't. The most heinous crime for the film had to be the Japanese samurai assassin cyborg which was like something out of a trashy low budget ripoff flick. The daft part being this cyborg looked infinitely more advanced and sophisticated than Robo, more like a Terminator, and could have easily kicked his ass all over. Well he could of if he didn't just do martial arts flying kicks on him. He does manage to slice Robo's forearm off but somehow Robo is able to just stick that gun enhancement back on, despite his arm being half sliced off by a katana. The killing of Officer Lewis definitely meant the end of the road for this franchise though. I was still quite impressed they got quite a few cast members back for classic characters, OCP suit Johnson, Casey Wong, Bixby Snyder and Sgt. Reed are all back, as is a nice well done cameo from ED 209 (unaltered too). I was also impressed with the makeup on Robo's face when his visor is off. They managed to get Burke looking exactly like Weller! no dilution anywhere, the effects are spot on and look great as does the rest of the suit. I also think Burke did a good job as Robo, he accentuates his walking and mouth movements a bit too much if you ask me but apart from that he was good. All sound effects on Robo's movement, his gun, ED 209 and visual graphics for Robo's vision are all perfectly recreated, good continuity. Yeah so jet pack Robo felt a bit too much like a merchandising ploy but...damn I'll admit it I quite liked the idea. Its not too incredible an idea and it did look quite cool. I think the limitations on budget and effects hampered what could of been something pretty neat. All in all this film isn't as bad as I recall to be honest, it carries on nicely from the previous films, story is OK, effects all look as good as previous films...had Weller been involved who knows. Bottom line for me is the lack of graphic violence, grimy seediness and dark satire, a must in a Robocop film.

Considering that the original Robocop is an action classic, you'd think that the filmmakers would try to deliver something even more exhilarating. The second feature was a decent affair, but it lacked what the first one had. With this third entry, the filmmakers opted for a more teenage friendly action film that was meant for a much younger audience than the original. The film's biggest flaw is the absence of Peter Weller, who passed on this film. Another problem is that the film has a laughable script with a few decent, underdeveloped ideas that just ends up falling flat. Throughout the film there are some entertaining scenes, but they quickly become ridiculous. I thought that the film had a few interesting ideas, but what it lacked was a truly engaging script and good cast. This film had the potential of being a great final outing; however the material is mostly flat and laughable. The fact that the movie was rated PG-13 makes this entry fall short of what it could have been. Since this is aimed for a younger audience, this entry lacks the thrills established in the original and the plot suffers significantly due to a lack of real satire that was seen in the original and the gross out violence. The idea of having OCP taking over Detroit in this entry was good, but it's a shame that the script is sloppily written due to the fact that the filmmakers simply didn't care about making an adult oriented Robocop film. If the movie would have been taken more seriously, I think that this one would have been great. Unfortunately this is a lazy effort that is a disappointment and it just doesn't cut it in terms of great action and thrills. As a whole, Robocop 3 plays out like a cheaply made B movie that just misses the mark.

Loved the first one, the second one was okay, but this one is ehhhh.

To try and understand what kind of crackpot story Frank Miller was trying to get across in this movie will never be fully understood unless you read the later comic adaption, it is by far one of the weirdest possible conclusions to the trilogy. It has its moments of action and comedy that are completely worth watching.