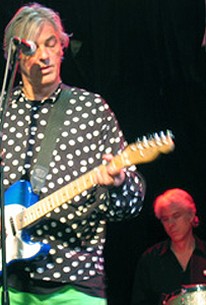 British singer and songwriter Robyn Hitchcock has been a cult favorite since beginning his career with the group the Soft Boys in the mid-1970's. Hitchcock's songs are immediately recognizable for their lovely but fractured melodic sense and his eccentric worldview, with images of fish, insects and death prominent in his bitterly witty lyrics. While Hitchcock has never enjoyed major commercial success, he's long been a favorite with other musician, and Peter Buck of R.E.M. has been an outspoken fan and collaborator for years. In 2006, Hitchcock and his ad hoc band the Venus Three -- featuring Buck and two members of R.E.M.'s touring ensemble, Scott McCaughey and Bill Rieflin -- convened at Hitchcock's home in West London to record his sixteenth solo album, Ole! Tarantula!. Filmmaker John Edginton was on hand with a camera crew to capture the proceedings, and Robyn Hitchcock: Sex, Food, Death and Insects offers an intimate look at the creative process of this one-of-a-kind artist. Robyn Hitchcock: Sex, Food, Death and Insects features cameo appearances from Led Zeppelin bassist John Paul Jones, British pop legend Nick Lowe and American alt-country favorite Gillian Welch, all of whom lend their talents to Hitchcock's recording sessions.

There are no critic reviews yet for Robyn Hitchcock: Sex, Food, Death...and Insects. Keep checking Rotten Tomatoes for updates!

There are no featured reviews for Robyn Hitchcock: Sex, Food, Death...and Insects at this time.