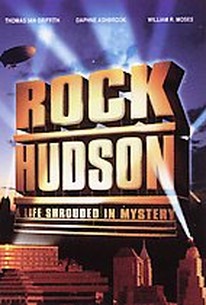 Rock Hudson is a TV-biopic oversimplification of the life and career of the durable screen idol. Most of the background material is based on the book by Phyllis Gates, who was briefly married to Hudson in the 1950s. The film recounts (in fan-magazine fashion) Hudson's rise from truck driver to movie star, then spends the last twenty minutes or so on his death from AIDS. Only a few of Hudson's personal and professional associates are depicted in the film: Daphne Ashbrook is seen as Phyllis Gates, Andrew Robinson (who'd portrayed Liberace in an earlier TV movie!) plays Hudson's manager Henry Wilson, and Don Galloway portrays John Frankenheimer, who directed Hudson in Seconds. Rock Hudson himself is played by Thomas Ian Griffith, who came from obscurity and promptly went back after this film was completed.

A film like Rock Hudson... allows its audience to float off on the myth that all it will take to solve homophobia is self-acceptance.

There are no featured reviews for Rock Hudson at this time.