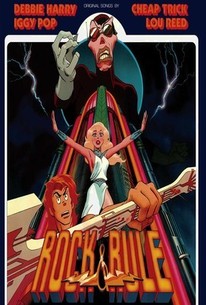 A rock & roll singer searches for eternal life in this animated musical fantasy set in a post-nuclear dystopia. Similar to the earlier Heavy Metal (1981) in tone, this film attempts to incorporate mythical themes and mutant beings with music by Cheap Trick, Deborah Harry, Iggy Pop, and other popular acts of the time, with mixed success. Clive Smith's film was a disappointment at the box-office, but has since attracted a minor cult following. ~ Robert Firsching, Rovi

Iggy Pop
as Monster from another Dimension

Critic Reviews for Rock And Rule

An oddity of an adult animated film, but it's one that every self respecting animation fan should watch at least once.

... hints at a grander finished product if more time and money had been available.

Rock & Rule is a masterpiece of outré animation and wildly ambitious vision and remains a triumph in animated feature film.

Audience Reviews for Rock And Rule

An alright Canadian made, poor man's Heavy Metal. Thts not to say that this isn't good, it's just not great, and throughout the whole thing I kind of wished I was watching Heaby Metal or a Ralph Bakshi flick. The story was pretty cheesy, and the music dates this movie pretty badly. The animation is pretty cool though. Especially the monster at the end. All in all worth a watch, but far from the best of this kind of genre. See the appeal for sure, and even liked this, but when all is said and done I was underwhelmed and probably won't be revisiting this movie anytime soon. Worth a watch though.

A classic animated comic-book Rock adventure! Great songs by Iggy Pop, Lou Reed, Cheap Trick, Debbie Harry and others. It's a great fantasy science fiction setting with rockers, a demon, heavy ogre guards, a beautiful singer and her devoted band. It's a fun ride with mature themes; not for kiddies. A treasure from the early 80's which CBC used to broadcast.

I see the appeal, just not a big of fan of this one. I do love Bakshi though.

It was equal parts good, and equal parts bad. The voice acting was atrocious, the animation was good. The heroes were annoying, the villain was totally awesome. The story was pretty weak, the music was fantastic (seriously, if there's a soundtrack album for this movie out there, I want a copy). The references to other movies were uninspired, the musical sections were unlike anything I've seen before (in a good way). It was a movie I don't regret seeing, but aside from a couple bits here and there, it's not one I'd like to see again.