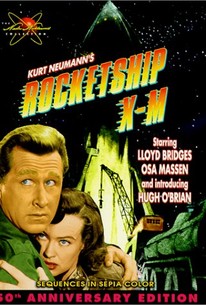 Set sometime in the future, this sci-fi film details the first manned space flight to the moon. Blown off its course by a meteor shower, Rocketship X-M misses the moon and lands on Mars instead. During an exploratory expedition, the crew finds evidence of a once-mighty civilization.

Mars segments make this worthwhile, but the rest is pretty slow.

The hokum sci-fi story is good for a few cheap laughs, as it takes itself so seriously until it goes all silly and then hits us with its bleak ending.

As was typically common with these old sci-fi beauties this movie is also know as 'Expedition Moon' and 'Rocketship Expedition Moon'. This movie was also the first outer space flick made directly after WWII, bit of movie knowledge for you there. The plot involves a small group of astronauts that will undertake a mission to the moon. Well I say astronauts but actually one is an ex-fighter pilot, Floyd Graham (Lloyd Bridges). One is a physicist and the designer of the RX-M, Dr. Karl Eckstrom (John Emery). One is an astronomer, Harry Chamberlain (Hugh O'Brian). One is a flight engineer, William Corrigan (Noah Beery) and one is a Chemist and assistant to Eckstrom, Dr. Lisa Van Horn (Osa Massen). Their mission is to simply reach the Moon, but halfway there the rockets give up leaving them floating in space, something to do with the fuel mixture? Anyway after rejigging the fuel consumption from different tanks they are back on the move again. Problem is when the engines fire the rocket blasts out of control at great speed knocking the crew unconscious. They awake to find themselves in orbit around Mars. OK so this being made 19 years before man first set foot on the moon for real, you can forgive them for not getting things quite right. That coupled with the fact there is of course suspension of disbelief required and artistic license used. Nonetheless you can't help but giggle at the oh so quaint ways showcased in this classic. For starters the five explorers are literally your everyday type people. Sure they're highly skilled intelligent people in their chosen fields but that's it; Dr. Eckstrom is obviously too old for this shit and Corrigan is obviously too overweight. My initial reaction when the five board their rocket was, hey! where are their spacesuits? Yep in this movie the team all wear what look to be aviator type attire, leather jackets and cargo/combat pants. Not a space helmet or any kind of specialised apparatus amongst them. All the scenes whilst inside the rocket feel like a war movie, they could all be inside a submarine, bomber or tank because the set and props seems to be constructed around that premise. Again unsurprising given the era. The sets do look good though I'll say that, the big port hole windows, bunk-beds and such are amusing but who cares. Its also amusing when the lack of gravity inside the rocket kicks in causing objects to float...accept them apparently. Oh and no more than five minutes or so after the rocket takes off they're all walking around like no ones business (laugh out loud!). The general science and astronomy is all over the place in this movie but to be fair, as said before, they probably just used tonnes of artistic license. I'm sure the director and co didn't really think this way. For example they plan to reach the Moon within a day (or even hours!), but when the rockets engines go nuts they end up reaching Mars within hours! Not entirely sure how long the crew are unconscious for but I don't think it was days or anything. I'm still not overly sure why the engines went berserk in the first place, something about adding the Earth's orbital velocity to the rocket, and the fuel mixture?? Still, the trip to Mars and back is a quick one in this universe. So they reach Mars and somehow still haven't burnt up all their fuel, oxygen, food and water. They decide to land and look around, as you do...no spacesuits!!! No helmets, no nothing, yes its one of those sci-fi classics where you can walk around on other planets unaided. All they use are aviator breathing masks (or gas masks?), binoculars, oh and they have guns too, in case of naughty aliens. Low and behold what do they find? an ancient alien civilisation wiped out by war (darn pesky atomic bombs again) and savage aliens intent on killing them with rocks (would you Adam n Eve it!). Despite that silliness they do a relatively good job with the Martian surface. Sure its clearly some desert in California but with a nice red tint on the film it actually looks quite good. In all honesty what can I say about this gem? There is an astronomical amount of hysterically bad inaccuracies to be found here, I know I haven't covered all of them because there are too many. The acting is a joy to watch as the cast do their best to make this nonsense seem thrilling. Clearly Emery as Eckstrom is having a ball with all his technical space jargon, I could listen to it all day. Then you have the comedic relief in Corrigan who is from Texas and keeps going on about bloody Texas. He also comes across as rather stupid for someone on this mission. As for Bridges, well you can see that future 'Hotshots' tomfoolery shining through, plus he still looks old even though he's young. Quick kudos for Morris Ankrum simply because he's always awesome in these flicks. The special effects are naturally hokey as hell but they do job. Its mostly a character driven plot confined within sets which are pleasing visually. Although there are some nice matte paintings for the Martian surface and the rocket on Earth. The sexism on display at times is hilarious in the fact that its so blatant yet obviously acceptable for the time; and the finale is actually quite bleak which was surprising. I don't think you can go wrong here if you're a fan of corny 50's science fiction. This has got to be one of the best.

When you see a moon landing film made before moon landing in real life, you know it's bound to be bad. To make things even worse, they landed on Mars instead of Moon where savagery Martians attacked the crew and they must escape... Not even good enough for a few chuckles.