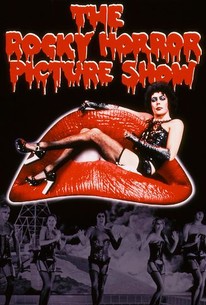 This low-budget freak show/cult classic/cultural institution concerns the misadventures of Brad Majors (Barry Bostwick) and Janet Weiss (Susan Sarandon) inside a strange mansion that they come across on a rainy night. After the wholesome pair profess their love through an opening song, their car breaks down in the woods, and they seek refuge in a towering castle nearby. Greeting them at the door is a ghoulish butler named Riff Raff (Richard O'Brien), who introduces them to a bacchanalian collection of partygoers dressed in outfits from some sort of interplanetary thrift shop. The host of this gathering is a transvestite clad in lingerie, Dr. Frank N. Furter (Tim Curry), a mad scientist who claims to be from another planet. With assistants Columbia (Nell Campbell) and Magenta (Patricia Quinn) looking on, Frank unveils his latest creation -- a figure wrapped in gauze and submerged in a tank full of liquid. With the addition of colored dyes and some assistance from the weather, Frank brings to life a blonde young beefcake wearing nothing but skimpy shorts, who launches into song in his first minute of life. Just when Brad and Janet think things couldn't get any stranger, a biker (Meat Loaf) bursts onto the scene to reclaim Columbia, his ex-girlfriend. When Frank kills the biker, it's clear that Brad and Janet will be guests for the night, and that they may be next on Frank's list -- whether for murder or carnal delights is uncertain. And just what is that mystery meat they're eating for dinner, anyway? In addition to playing Riff Raff, O'Brien wrote the catchy songs, with John Barry and Richard Hartley composing the score. ~ Derek Armstrong, Rovi

Stripping away the live elements, one finds a movie at the heart of this all. It's a pretty bad movie, as even some of the most die-hard adherents will admit.

One hundred minutes of pure queer celebration that manages to concoct a bizarre cocktail of sincerity and reckless abandon.

Most of the jokes that might have seemed jolly fun on stage now appear obvious and even flat. The sparkle's gone.

The wit is too weak to sustain a film, and the songs all sound the same.

A string of hummable songs gives it momentum, Gray's admirably straight-faced narrator holds it together, and a run on black lingerie takes care of almost everything else.

Viewed on video simply as a movie, without the midnight sideshow, it's cheerful and silly, and kind of sweet, and forgettable.

If we choose one piece of culture ephemera to beam into space to let aliens know we're here, let it be this. The universe is filled with weirdos lost in time, lost in space, but through Rocky Horror perhaps we can find one another.

For the most part it moves spiritedly along and the whole thing is a giant giggle. It's all so blatantly outrageous it can only be taken in the spirit of campy fun; this is one time a stage production has been enhanced by the film version.

The music is only adequate, and the acting leaves something to be desired, except in the case of Tim Curry, who manages some fine turns as Dr. Frank N. Furter.

Famous for its allure as an audience-participation event, this adaptation of the stage musical works just fine as a solo viewing at home, with no resultant diminishment of its highlights.

"The Rocky Horror Picture Show" didn't invent midnight screenings but instead turned a off Broadway musical into art form that became a phenomenon within itself. Originally it opened in nation release on September 26, 1975 with an advertisement that had the iconic poster of a lipsticked mouth with the tagline "A Different Set of Jaws"-which was a reference to Steven Spielburg's "Jaws" which went on to become the top grossing picture of 1975. Getting back to "Rocky Horror", studio executives at 20th Century-Fox knew that they had an unusual film on their hands which would require a different approach to marketing since 20th Century-Fox needed a hit after it scored two of the biggest films that the studio produced which were 1974's "Young Frankenstein",and "Irwin Allen's The Towering Inferno". Before the film's U.S. premiere in Los Angeles, Fox hired a promotion company to distribute flyers to people in line to see other films as well as concerts, clubs,and beaches and other spots of interest. The company that Fox promoted handed out more than 100,000 flyers in the eight weeks before the film opened in larger cities and later on nationwide. The premise worked in some areas and in other didn't. During it's original release "Rocky Horror" became a boxoffice disaster and it wasn't until 1976 when the Waverly Theater in New York City began showing the film as part of it's midnight screenings and from there it caught on to other cities as part of its Friday and Saturday night late shows bringing in massive crowds. From there the midnight showings expanded into more cities by the end of 1980 where it played at more than 200 theaters nationwide and to this day it is the longest running midnight screening of a film that not only has audience participation but bringing in massive crowds every weekend to see it. The long-running continuation of "The Rocky Horror Picture Show" was soon followed by other midnight screenings of "Monty Python and the Holy Grail", "Pink Flamingos", "Fritz The Cat", "Blazing Saddles","Night of the Living Dead", "Harold and Maude", "King of Hearts", "El Topo",not to mention the 1936 movie "Reefer Madness" just to name a few. But "Rocky Horror" added another level of enjoyment to these midnight screenings since some theaters gave discounted admission to anyone dressed up in character costumes where there would be singing along and vocally interacting with the one screen action(among the items frequently brought to throw at the screen were toast, newspapers, confetti,rice, toilet paper,and a deck of cards)which continues to this day....40th years after its original release. "The Rocky Horror Picture Show" even though it was a low-budget produced (by Lou Adler),cult classic made huge stars of two unknown actors Barry Bostwick and future Oscar winning actress Susan Sarandon and made British sensation Tim Curry into a cult phenomenon beyond expectations. Even for its time 1975 was controversial but still remains a bonafide classic especially when we want to go through the time warp again.

An adorable hybrid of musical, comedy and horror parody with a delightful performance by Tim Curry, who steals the show and was certainly having a lot of fun doing this movie - and it is full of great songs, delicious over-the-top acting and well-inspired moments.

Somehow my flixster rating for this was 2, even though I never saw it before (huh?). Well, what do you know, finally watched it tonight and rating was about right. Glad I finally saw it, but honestly it's nothing I would rush to watch again. It's original, I will give it that. I liked a few, not all, of the songs. And full marks to Susan Sarandon. I did not actually realise she was in this. On the downside, it's kind of ugly to look at and you have to suspend belief beyond what you normally would in a musical. I'm not sure I entirely "got" it, to be honest. It's kind of grotesque. Actually really having trouble articulating my thoughts on this. That is probably exactly what they were going for!

This is THE film that comes to mind when people talk about cult classics and 'midnight movies'. It's also quite possibly the weirdest musical I have ever seen, and I was completely sober, too. What we get here is a campy, schlocky ode to campy and schlocky sci-fi and horror fare, done as a gloriously cheesy rock and roll musical joyride. The plot it really bare bones, and doesn't really make a whole lot of sense or really have much of a point, but that's besides the point. What makes this so fun, memorable, and popular is that it is just so odd, random, and ridiculous, and it's just damn near impossible to not find something to enjoy here. What bare plot there is concerns newlyweds Brad and Janet who, after having car trouble during a storm, seek shelter/assistance at a gothic castle filled with a bunch of delightfully odd weirdos, with the man in charge being a transvestite mad scientist who claims to be from another planet, and who is in the process of creating his own version of the Frankenstein story. This is not a film for all tastes, but I think it is one of those movies that everyone should still see, at least once. The music is really awesome, catchy, and fun, the performances are also just a scream, especially Tim Curry in his signature role as the transvestite Dr. Frank-N-Furter. I'm a fan of redheads, and in this film we get two of them, both lovely in their own way, whether it's the curly longhaired variety of Patricia Quinn as Magenta, or, my favorite, the super short, straight, and flat locks of Little Nell Campbell as Columbia...MEOW! This film also has a rockin' turn from Meatloaf, as well as Susan Sarandon at her flat out sexiest and most bangable. The film is a great ode to sci-fi and horror, and the set designs, costumes, and art direction reflect this, bringing together a mix of the gothic, with the kinky, and the delightfully tacky camp side of life. If you want to have a good time, and really crave something wild and outrageous, then you must give this a watch. Seeing it at a public viewing is the preferred way to do it, but not if you haven't already seen it before. So yeah, watch it at home if you're a newbie, then go join the masses so you can really appreciate the love people have for this one.