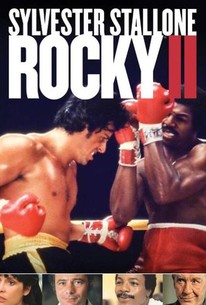 Critics Consensus: Rocky II is a movie that dares you to root again for the ultimate underdog -- and succeeds due to an infectiously powerful climax.

Critics Consensus: Rocky II is a movie that dares you to root again for the ultimate underdog -- and succeeds due to an infectiously powerful climax.

Critic Consensus: Rocky II is a movie that dares you to root again for the ultimate underdog -- and succeeds due to an infectiously powerful climax.

After scoring a personal victory (though a physical defeat) in his "Cinderella" bout with Apollo Creed, Rocky Balboa (Sylvester Stallone) has gone to seed. In this sequel, he allows his celebrity to go to his head and loses the respect of friends and family--not to mention all his money. Against the wishes of his wife "Yo, Adrian" (Talia Shire), Rocky decides upon one more fight to get back on his financial feet. Thus the stage is set for a rematch with Apollo Creed.Like its predecessor, Rocky II made a fortune at the box office.

Rocky II contains the flaws of the original: simplistic characterizations, saccharine romance, a tendency to cuteness. But it also fills the heart and quickens the pulse.

By the punishing heft of the big fight, there is the clear hint that the series will soon plunge into an unpalatable patriotic fervour. For now, though, with its leathery texture of working class Philly-life it felt enough like reality.

Stallone and producers Irwin Winkler and Robert Chartoff know from experience audiences love to root for the underdog and have concocted an irresistible final 30 minutes.

Sylvester Stallone's follow-up to his runaway success of 1976 is a little more threadbare in spots than the original, but it still has some conviction and spunk.

Stallone's performance as a Philadelphia saint in a B movie physique leaves you undecided whether to gag or sob, but the final fight sequences make up for it; a full-blooded Hollywood finale reaching giddy heights of cathartic glee.

Rocky II has a waxy feeling, and it never comes to life the way its predecessor did.

Although Rocky II builds itself around a rematch between Rocky and Apollo, the movie is anything but a lazy sequel.

Rocky II plays like exactly what it is: a "greatest hits" version of the original, one that's tasked with moving the story forward while also re-playing a lot of the same beats that folks loved before.

Feels like the most forgettable film of the lot.

Sly sequel is as predictable as a gym workout.

Taking what John G. Avildsen accomplished with the first film and then adding his own style, Stallone comes forward as an action visionary, with the fight scene a vast improvement when compared to the original.

Yes, Sylvester Stallone, you really did it, and this exciting and surprisingly moving sequel - written, directed and acted by him, no less - is an impressive follow-up and definite proof that the success of that fantastic first film was a lot more than just beginner's luck.

All this film really does is build stronger characters and a much better story to follow. As Rocky and Adrian get married, buy a house and attempt to have a kid, Rocky is faced with job gains and losses all over town. Wanting something more with his life, he realizes that his true calling is still back in the boxing ring. More than anything, this film serves as a very strong redemption film, and in the end, I almost had tears in my eyes at how effective they make it out to be. Stallone again, puts his all into this character, and although some of the other actors feels a little unmotivated (mainly the character of Adrian), the film is still great overall. The filmmaking and script is overall better in the first film, but this serves as a great sequel! The "champ" is back!

One of the best sequels ever and maybe more powerful that the first Rocky .

Sylvester Stallone is a knockout punch in front and behind the camera as he directs the sequel to his Oscar-winning-hay-maker. Rocky II is somewhat predictable in its story but is held up by it's glorifying humility and visual presentation. 4/5