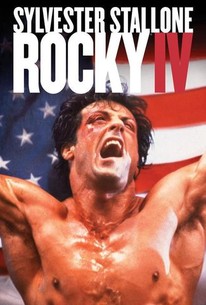 Critics Consensus: Rocky IV inflates the action to absurd heights, but it ultimately rings hollow thanks to a story that hits the same basic beats as the first three entries in the franchise.

Critics Consensus: Rocky IV inflates the action to absurd heights, but it ultimately rings hollow thanks to a story that hits the same basic beats as the first three entries in the franchise.

Critic Consensus: Rocky IV inflates the action to absurd heights, but it ultimately rings hollow thanks to a story that hits the same basic beats as the first three entries in the franchise.

Stallone is back for the fourth time (as Rocky) when an invincible computer-trained Soviet boxer kills his friend in a one-sided bout. Rocky must get ready for one more impossible bout against a clobbering cluck who probably couldn't get his own grandma to root for him. Even though there is probably never any real doubt as to the outcome, this film will likely have viewers on their chairs' edges one more time.

James Brown (II)
as The Godfather of Soul

Robert Doornick
as Sico the Robot

Say what you like about the original Rocky, at least it was about something -- a sweet pug up against the system, and in love with a dowd. Rocky IV appears to be an epic about Sylvester Stallone's penchant for self-abuse.

'Rocky IV' still stands, not as a highlight of the series (certainly not that) but as a quintessential artifact of mid-'80s studio filmmaking: soulless, flag-waving, soundtrack-blasting Product.

Padded with clips from earlier Rocky pictures, adding nothing to his mythic, let alone human dimensions, it lacks even the primitive suspense and crude capacity to release underdog emotions that permitted its predecessors to conquer one's better judgment.

This is grim and witless storytelling, and what makes it so depressing is that it hasn't improved by so much as a chemical trace since the days of the first Rocky.

The new film's narrative is stripped down to essentials, which gives it an emblematic quality.

Bombastic, exaggerated and one-third musical montage, this Rocky sequel is definitely not a good. [Full review in Spanish]

There are simply too many ludicrous elements to ignore: Paulie's robot; Brigitte Nielsen, even less expressive than the robot; about a thousand music-video-styled montages; Lundgren's delivery of Drago's deadly dialogue; etc.

It's a bad movie, no doubt, but at the same time, and somewhat paradoxically, it's also a great movie. Figure that one out.

It's ridiculous in a lot of ways... But hot d---- is this ever a fun, rewatchable movie.

The outcome of the film is predetermined by the formulaic scripts of Rocky II and Rocky III. Stallone boxed himself into a corner with this one.

This jingoistic stupidity was obviously made to show the Americans overthrowing the Russians during the Cold War, but what is even worse is that in the end it seems like nothing more than a ridiculous montage of music video clips without any passion or good drama.

While starting out on a better note than any of the previous films, "Rocky IV" feels more of the same. Redemption and friendship just like the third instalment. Once a friendship has to come to an end, motivation is at it's highest peak. It seems like an easy way to continue a film, but it's extremely effective. Most of this film is about training and less of relationship and character development, but in the end, the series always did need a little more of that. I just wish they didn't have to wait until this film, which is the only reason the film was made. The shortest film in the series is based on training, which means after the build-up at the beginning, it is a pretty thinly written script. I enjoyed watching this film, but besides a few key moments, it's kind of dry. The final fight is awesome though!

Rocky IV, no doubt, has its motivational and somewhat inspirational moments during its climatic scenes, but it is knocked down by its inconsistent direction and cheesy cliched montages. This fourth installment does induce some patriotism (Cold War era) but doesn't fully satisfy or have the "eye of the tiger" 3.5/5

Rocky way to much