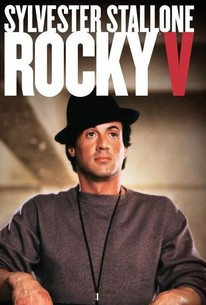 Critics Consensus: Rocky V's attempts to recapture the original's working-class grit are as transparently phony as each of the thuddingly obvious plot developments in a misguided installment that sent the franchise flailing into longterm limbo.

Critics Consensus: Rocky V's attempts to recapture the original's working-class grit are as transparently phony as each of the thuddingly obvious plot developments in a misguided installment that sent the franchise flailing into longterm limbo.

Critic Consensus: Rocky V's attempts to recapture the original's working-class grit are as transparently phony as each of the thuddingly obvious plot developments in a misguided installment that sent the franchise flailing into longterm limbo.

Touted upon its release as the finale of the Rocky saga, this fifth entry in the long-running series of sports dramas reunites star Sylvester Stallone with John G. Avildsen, director of the Oscar-winning original. Stallone is Rocky Balboa, suffering from career-ending brain damage as a result of his punishing bout with Ivan Drago at the finale of the previous film. Upon their return to Philadelphia, Rocky and his wife, Adrian (Talia Shire), discover they are broke, their fortune squandered by an incompetent accountant. Forced to move back to their working-class neighborhood, Rocky finds that his only asset is the run-down gym willed to him by Mickey (Burgess Meredith, who appears in new flashback sequences). Resisting big money offered to him by Don King-like boxing promoter George Washington Duke (Richard Gant), Rocky becomes a trainer and finds a talented comer in Tommy Gunn (real-life boxer Tommy Morrison, nephew of John Wayne). Rocky's son (played by Stallone's real-life son Sage Stallone) feels neglected by his father, who lavishes attention on his protégé, but Tommy ultimately turns his back on his mentor to sign a more lucrative deal with Duke, leading to a street-fight showdown.

James Binns
as Himself

Carol A. Ready
as Russian Woman

Charles Hines
as Boxer
View All

Rocky V is not as awful as we had imagined. There is more feeling in this one -- a relief from the steroid-pumped cartoons that were Rocky III and Rocky IV -- but the feeling is, alas, recycled.

The dramatic moves are so obvious and shopworn that not even the star's mournful basset-hound expressions can redeem them.

Whereas the first and far superior Rocky had real heart, this tries and fails to have brains.

A sloppy but good-natured reminder of just what it is that has kept Rocky Balboa afloat for 14 years.

In Rock V, the underdog is officially diagnosed as 'brain damaged.' Yo. So what else is new?

Like watching some favourite relative die, Stallone subjects the viewer to a miserable and pathetic end for such an enduring character.

It may be compromised, but what it's trying to do is worthwhile enough to appreciate the effort. Because if its reputation, Rocky V is now the ultimate underdog of the underdog series.

This is the first picture in the series that feels inert.

It's become popular in most circles to point to this installment as the one where things went topsy-turvy, but the truth is that Rocky V is far better than most folks give it credit for.

It's frustrating that it's bad, too, because it was the first movie to really tackle the consequences of being Rocky.

The last 30 min make Rocky V a worthwhile watch, and even though there are numerous flaws, it's a rather engrossing film and the most underrated of the Rocky movies.

As far as brain damage goes, Rocky V is a shameful idiocy that cannot even justify why it was made, given how the whole family drama seems completely forced, the excess of sappiness is painful to see and in the end it all comes down to unnecessary, pointless street-fighting.

Ambitious to a point, "Rocky V" tries far too hard to create a human drama, rather than a triumphant boxing story, which is what this film series is meant to be like. This time, Rocky is done fighting once and for all, and once a newcomer thinks he is the best, he is trained by the world champion. Throughout the film, he wins the title, but is forced into dangerous times, agreeing to things he shouldn't and ending up in worse places than Rocky ever was. This is not a Rocky films, this is a spin-off that only works half of the time. It's not a good film in any way, but there are elements that I really admired. It's not as bad of a film as some people make it out to be, but it's middle of the road. I would never recommend it though.

Stallone trades in the ambiance of a big-fight atmosphere for senseless street-fighting. Rocky V is an unacceptable installment that tarnishes the already back-down-on-his-luck fighter. The uninspiring acting and street-smart vibe is just as damaging as the fighter's brain in this film. But though the film has some significant damages it still manages to be somewhat uplifting with the lack of magic it possessed. 3/5

Tiresome, uninspired fifth film in the series. This film was poorly written, acted and too over the top that it ruined the character of Rocky Balboa for me. By this time during the series, you can tell that the filmmakers were running out of ideas, and the film is one of the worst I've seen in the series. If you're looking for the worst film in the franchise, then Rocky V is the one. I thought that the film lacked anything good, and in many ways it was very cheesy, boring and unimpressive. What is more startling is that director John G. Avildsen, who also directed the first film, directs this film, and this was the best that he could do. I was really disappointed with this film, and I felt they could have done much better than this, and overall the film has no redeeming qualities whatsoever. Rocky V is a silly film that just cheapens out the character and is not one of those memorable and fun films to watch. The script is tiresome, and pointless with a poorly written out plot, and has a pitiful cast of actors starring in this film. Even the original cast of Rocky seems bored in this flick, and are not interesting to watch on-screen. I hated the film, and thought this film should never have been made. As a whole, this film will surely disappoint die hard Rocky fans, and it is a laughable film that is among the worst sequels I've seen. However its sequel Rocky Balboa would recapture the traditional elements that made the first film in the series so good. Don't expect much from this film as you're surely going to be disappointed. The payoff to this entry is plainly horrible, and it makes you want more out of the film, and unfortunately, the film never really takes off and because of that, it is a pointless and pitiful entry in the once great Rocky franchise.