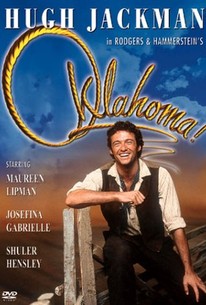 When Mary Rodgers, daughter of the composer Richard Rodgers, was reported as saying she never wanted to see another Oklahoma!, it was her way of paying the highest tribute to Trevor Nunn's production at the Royal National Theatre which was subsequently taken into the studio and filmed. The camera follows the playgoers into the auditorium of the Olivier where in their company we watch the show and applaud the numbers as the real thing. Nunn treats Rodgers and Hammerstein's first collaboration with the utmost seriousness, restoring the full text so that it comes across as a drama indebted to Eugene O'Neill. Although Oklahoma! unfolds at a leisurely pace, it is extraordinary how one is drawn into the drama under Nunn's direction.

There's seldom a wish for true locations as the pace picks up and we move into the claustrophobic company of Judd Fry in his riveting encounter with the cowboy Curly. The close-up camera work affords an experience the theatre can't bring and also pays handsome dividends in appreciating Susan Stroman's intricate and lively choreography. Her dancers are a fine team, notably Jimmy Johnston who is outstanding as Will Parker leading the Kansas City ensemble. Hugh Jackman (X-Men) as Curly matches him in vocal prowess and looks, and Shuler Hensley sings the tricky role of Judd Fry very well. It's harder to place Peter Polycarpou's Pedlar, a considerably larger role than in the film version, whose accent strays from London's East End to the plains of Europe. Maureen Lipman, rightly deemed the lynchpin of the musical by Nunn, is a joy to watch as Aunt Eller. Laurey (Josefina Gabrielle) and Ado Annie (Vicki Simon) are good but not special. Aside from an abrupt start to Act Two and the occasional voice off microphone, the production sounds good with a larger orchestra present than in the theatre. An Oklahoma! on an epic scale. --Adrian Edwards

Under Nunn ("Cats," "Les Misérables"), the story takes a much darker turn and, surprisingly, makes more sense in the process.

Hugh is just FABULOUS in this!!