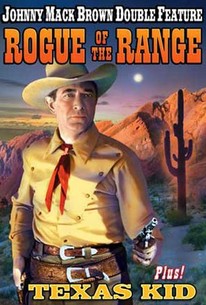 Rogue of the Range Photos

Produced by low-budget company Supreme Pictures (which weren't), this middling B-western was saved somewhat by its personable star, the strapping former footballer Johnny Mack Brown. Mack plays Dan Doran, the rogue of the title, who rescues a pretty missionary, Tess (Phyllis Hume), from the ubiquitous runaway team. In town, Doran not only leaves the welfare of the girl to Stella, the saloon hostess (Lois January), but admits to having earlier robbed the stage. Sent up the river for 20 years, Dan makes the acquaintance of Jim Mitchell (George Ball), a fellow inmate, and the two make their escape together. Returning to the scene of the crime, Dan joins Jim's gang of stage robbers. The town's natty-looking banker, Lige Branscomb (Alden Chase aka Stephen Chase) is observed courting Tess, who now owns the Golden Nugget coffee shop. Dan, who is in reality an undercover G-man, has Stella rescue Tess from marrying the villainous Branscomb who, of course, is the secret leader of the gang of stage robbers. Leaving Tess to her coffee shop, Dan proposes to Stella, who accepts. Although already beginning to exhibit the middle-age spread that would mar his later appearances, Johnny Mack Brown once again proves that he was a better actor than most of his B- western rivals. The same cannot be said for Phyllis Hume, who plays the missionary girl with only one expression, bewilderment, and whose only film this seems to have been. Max Davidson, an old-fashioned "Dutch-style" comic who had been in films before Charles Chaplin and almost everyone else, appears briefly and for no apparent reason in order to perform a bit of timeworn shtick as a Jewish salesman.

Max Davidson
as The Peddler (uncredited)

Critic Reviews for Rogue of the Range

There are no critic reviews yet for Rogue of the Range. Keep checking Rotten Tomatoes for updates!

There are no featured reviews for Rogue of the Range at this time.

Rogue of the Range Quotes